Woah… the world’s most iconic tiny figure, LEGO minifigure (AKA minifig) is officially 40 years old. But it is worthy to note that the big 4…0 is starting from the time where the minifig you knew today began. In actual fact, development of this little figure start way back and the first, bizarre looking LEGO building figures were introduced in 1974 and then in 1975, LEGO stage extra were introduced, but they were a face and had no moveable limbs.

I know right. Those were weird stuff. Anyways, the LEGO minifigure we knew today was born in 1978 and these yellow figures have remain largely unchanged up to today. Then, of course, there were tweaks along the way, like hair pieces, double faces, specialized minifigures, and then the even tinier microfigures. 40 years since its beginning, LEGO has since produced over 4 billion minifigures and within that astronomical number are more than 3,000 different designs. Below is an infographic that takes you through the 40 years of LEGO minifigure. 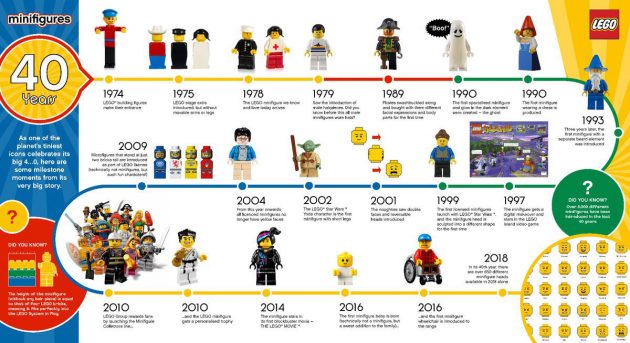 Fun fact: Yellow was chosen as minifigure’s color because it was deemed a neutral “skin color” since nobody in real life has bright yellow skin and as such, LEGO minifigures represent no specific race or ethnic background and therefore, nobody is left out.