Modding minivan, AKA MPV, is borderline waste of time (OK. IT IS a waste of time). I mean, seriously, what can one get out of it? Speed? With so many people in it? However, if you are thinking of turning a minivan into a BatVan, or a Goddard, a Federation Type 6 Shuttlecraft straight out of Star Trek: The Next Generation you see here, then that’s a different story. In fact, if you are hell bent of making a statement with your mundane van, those are the only two mods you should consider. Period. The Star Trek Shuttlecraft Car was from a few years ago (as far back as 2014). 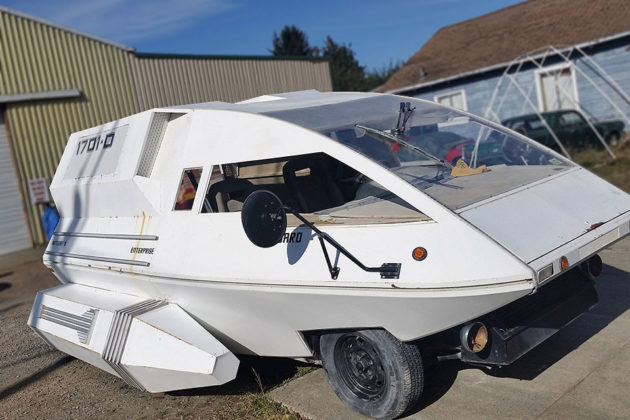 Prior to becoming a shuttlecraft for USS Enterprise-D, it was a Ford Aerostar Minivan which, IMHO, is not evenly remotely related to a spaceship except for the spacious interior. Based on a report, the shuttlecraft-on-wheels belongs to Cory Mervis-Bocskor who originally intended to show it off at Burning Man. Which it did, but anyways, it is apparently not street legal (although it did tried) and so, it may need extra logistic to get it there. It has been quite a number of years since this one-of-a-kind shuttlecraft/van hybrid surfaced, so we are not surprised it is not even running and it appears to be so, judging from the rust streaks on the shuttlecraft’s body.