with the proliferation of tablets into kids life, you will need something with a little more impact to draw them away from the angry avians versus evil pigs world and to be honest, it could a pretty taunting task. i mean, kids these days aren’t naive (innocent, but definitely as naive as we used to be), if you give them something less than believable, they may even scoff at you. no kidding. simple coin disappearing tricks just don’t cut it these days. and this is precisely why you should consider Modarri Toy Cars. i know. the name certainly don’t sounds as awesome as Ben 10, but that doesn’t detract it from being the Ferrari of toys (not in the price aspect though, which is a good thing). with the Modarri Toy Cars you will witness the attention to detail and craftsmanship that will ensure engagement with the child (or even you), spur their (or your) creativity, and durability, which sadly, is seriously lacking in today’s toys.

these toys car take you and your kids back to the basic of toys and makes playing more educational, and by “educational” we mean exposing them to creativity through mixing-and-matching the interchangeable parts, learning about the mechanics of the car through the realistic steering and suspension system of the Modarri toy cars, plus introducing the young ones to the technology that can be used to aid in customizing the toy cars such as editing CAD files to custom the car parts and having 3D print the parts in custom materials and colors. so as you can see, it does more than just scratching the surface of “education”, it goes beyond and far behind into the process (and beyond just mindless “vroom, vroom…”), which we haven’t see any toys doing so. there are also no (potentially) toxic batteries to deal with here – the cars are powered by imagination using the kids finger to hustle them around courses which you can encourage your kids to build using stuff like existing recycled cardboards and the likes.

there are three cars in the Modarri Toy Cars fleet to choose from (pictured above): the Street Car S1, Dirt Car X1 and a Track Car T1. every car comes with a Hex Tool for taking apart (and putting together) the car’s 12 components. each of those parts can be mix-and-match with other Modarri cars to create a unique and customized look. California-based startup, ThoughtFull Toys is the company behind the Modarri Toy Cars and it has taken this fun and educational endeavor to Kickstarter, seeking to raise $80,000 to help take the toys transition from a dream to reality. everything is in place, all that’s left is your money which you can help by backing the project with $20 or more. hit up the Modarri Toy Cars’ Kickstarter campaign page to see the different reward levels. another look, followed by a product pitch video after the break. 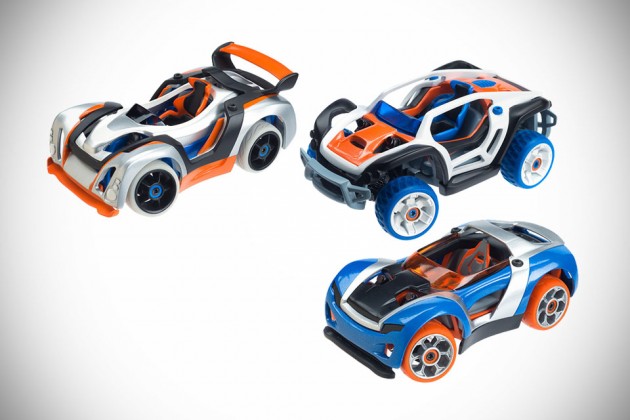