The next big thing in human history is probably space travel. Well, at least it is for the rich – the very rich. Anywho, space travel is no doubt an exciting prospect, but have you thought about inflight services in zero gravity? I mean, how do you eat and drink without gravity? I am not sure if Virgin Galactic have thought about it, but one thing for sure is, Maison Mumm sure have.

Didier Mariotti, Cellar Master at Maison Mumm has collaborated with Octave de Gaulle, CEO of young space design agency Spade to developed a new kind of champagne bottle that will allow space travelers to consume champagne while in zero gravity.

Three years in the making, the Mumm Grand Cordon Stellar, as it is called, is finally unveiled, ready to accompany space travelers on a journey beyond the Earth’s atmosphere. But how do you get the liquid out without it going rogue in weightless space? Well, here’s the magic:

“Without gravity’s helping hand, its high-tech bottle design – crafted from transparent glass and embellished with the Mumm Grand Cordon cuvée’s distinctive red sash – uses the champagne’s gas to expel the liquid into a ring-shaped frame, where it is concentrated into a droplet of bubbles. It can then be passed to someone and released into the air, where it floats until gathered up in a specially designed glass.” 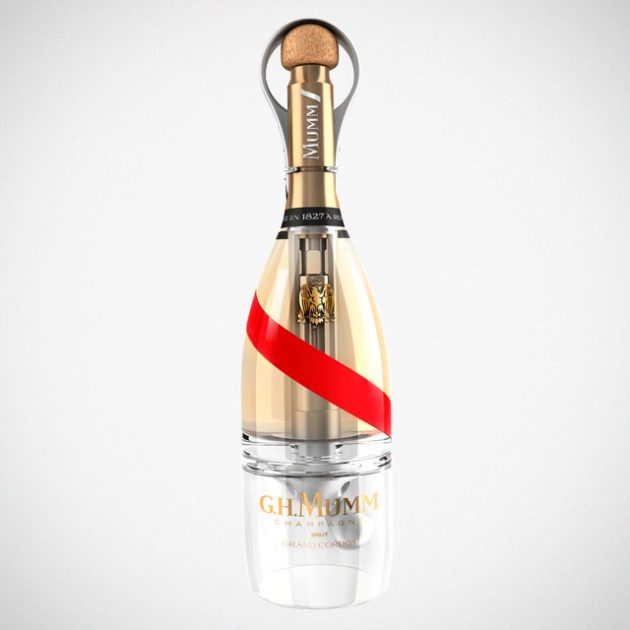 It sounds simple enough, but it is no easy task getting it to work as intended. The bottle is just one part of the equation. The cup is another. The cup, also adorned with a red sash as a homage to Mumm Grand Cordon, features a slightly concave open vessel 5 cm (about 2 inches) in diameter that is designed to enable flooring droplet to adhere to the glass and also to allow the celebratory glass clinking in an act of toast.

Finally, completing the equation is the beverage itself. When the space wine leaves the bottle, it turns into effervescent ball of foam and will remain so on the specially designed cup until it is consumed and when that happens, i.e. the foam enters the mouth, it will turn into liquid again so you’d actually be drinking then tasting foam. Now, that totally sounds like magic to me!

I am sure it will taste a tad different when consuming it places with gravity, but what the hell, it is still champagne, isn’t it? The important take away here is, there is hope for celebratory toasts in space for future space travelers after all.

Speaking of which… while Mumm Grand Cordon Stellar Champagne is obviously targeted at near future space travelers and astronauts, non-space travelers won’t be left out in the cold. Maison Mumm said it plans to serve Mumm Grand Cordon Stellar to participants on Novespace’s zero flight too. So, you need not to be a multi-millionaire to experience drinking champagne in a weightless environment. I guess that is a good news? Maybe?