Automakers share the pain of flat tires with motorists and that is why we have run flat tires. And that’s here on Earth where emergency vehicle services are always a phone call away. Now, imagine the same thing happen when the vehicle is, say, 33.9 million miles away on Mars. Surely, NASA did not have team of robotic AAA on standby there and so, when wheels are damaged, they are damaged, end of story for the Mars-roaming rover and that’s no cool. 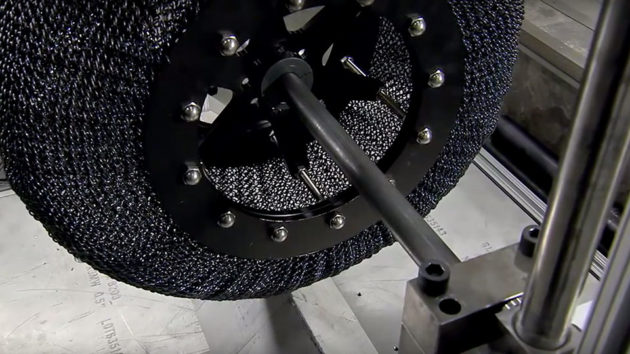 Obviously, NASA is not going to stand by and do nothing. In fact, the space agency did and the result was solid aluminum wheels with thick threads and grousers. But it is not the perfect solution; this literally space-age wheels are prone to wear and tear, and therefore they will fail. While it did fail within NASA’s expectations as far as the rover performance in range is concerned, NASA think it could do better and hence, the Shape Memory Alloy (SMA) is born. By now, you would have already notice the rather unassuming chain mail-like tire.

And no, it is not a regular rubber tire (obviously) wrapped in chain mail. The wheel itself is of chain mail structure, but it is no ordinary metal; it is a futuristic stoichiometric nickel titanium. What makes this material so special is its ability to ‘remember’ its original shape after having rolled over something. However, the real deal sweetener here is, it won’t be affected by wear and tear – thanks to the material’s ability to “rearrange its molecules to accommodate the deformation.” In other words, the tire will kind of heals itself.

It is worthy to note the SMA is actually based on the tires from Apollo-era, but redesigned with updated materials and technology. So, will we be expecting a rover that has the ability traverse hostile terrains over the current 10 miles? Actually, no. At least, it won’t for now. It eventually will, however, and when it does, expect a rover that can take on even the most unforgiving surfaces and even bear heavier payloads without worrying about the wheels quitting.

Further plan will include implementing the same tire technology onto “manned vehicles” which would then allow these vehicles to travel at higher speeds. Speaking of which, before you go all elated that one day you could shove this onto your Land Rover Defender for some crazy off-road adventure, you have to know that when NASA said “manned vehicles” it meant to say space vehicles. You know, astronauts’ ride on alien planet like the Red Planet? Then again, who knows? Your grandson could be driving automobile with such wheels in future – that’s if automobiles of the future still have wheels at all. Keep going for another test video and see it in action on a regular automobile.