Tesla has done it and so has Mercedes-Benz. Now, Japan automaker Nissan is also into it. Yes. We are talking about stationary energy storage system for homes and businesses. While Tesla and Mercedes made announcements mainly for home use, Nissan’s iteration is geared towards commercial usage and it didn’t start from scratch either. Instead, Nissan collaborates with Green Charge Networks, a provider of commercial energy storage, to use Lead batteries outside the vehicle through 4R Energy, a joint-venture with Sumitomo Corp. formed in 2010. 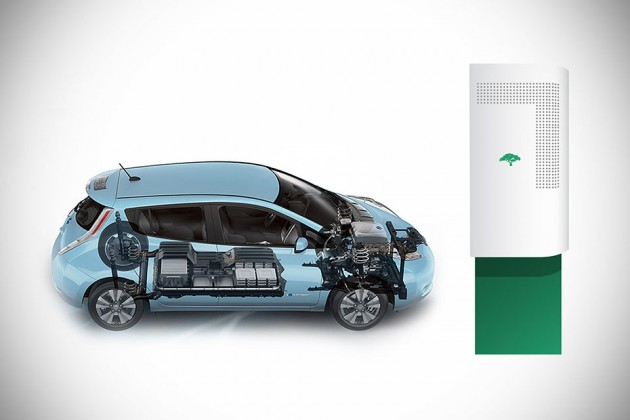 The move makes perfect sense, since over 178,000 Leaf have been sold since its launch in late 2010, re-using the Leaf batteries could further strengthen the company’s commitment to sustainability and reducing greenhouse gas emissions. Since the incorporation of Nissan 4R, Nissan has been researching the possibility of using Leaf batteries outside of the vehicle. The new energy storage system leverages on Green Charge’s intelligent software and Power Efficiency Agreement, which Nissan said “has a cost advantage over traditional units, opening up new markets where incentive programs are currently not offered.”

Nissan will install first of such storage at a Nissan facility this summer. The company will configure the Leaf batteries to offset peak electricity used by the facility to, in Nissan’s words, “creating savings while also benefiting the utility grid.” Like Tesla and Mercedes-Benz’s product, Nissan 4R Stationary Commercial Energy Storage can also be rigged to solar panels or wind-generated sources. You can learn more about the Nissan 4R and Green Charge partnership HERE.