NERF has just pushed the bar of foam warfare up with the confirmation of the NERF N-Strike Elite Rhino-Fire Blaster, arriving this Fall, exclusively at Walmart, for $99.99. this would-be mother of all blaster has an alternating dual barrel setup, fed with N-Strike Elite darts from two drum magazines with a total a total capacity of 50 foam darts. expect to rain foams on thy opponents at up to 90 feet with a squeeze of the trigger – thanks to the battery-powered motors which are kept juiced by a massive array of D size batteries (six numbers, not included). no word on how long those six “D” batteries will last you and also no details on how heavy the beast will weigh fully loaded. regardless, one thing is for sure: you won’t want to be running around with this baby, well, maybe just firing it standing up and not assaulting the objective or any like that.

the blaster is fitted with a front handle for firing from the hip like a mini gun and there is also a tripod to plant this thing on ground for even more accuracy. our advise is, grab a few more drums, or at least a sidearm, cos’ this monster spits foam dart in auto mode, which means you could be running out of foam darts in a matter of minutes and you most certainly won’t want to be caught without any ammunition. then again, if you serious about foam dart warfare, this is probably going to be like the Vulcan and that’s to be a support weapon. what do you think? 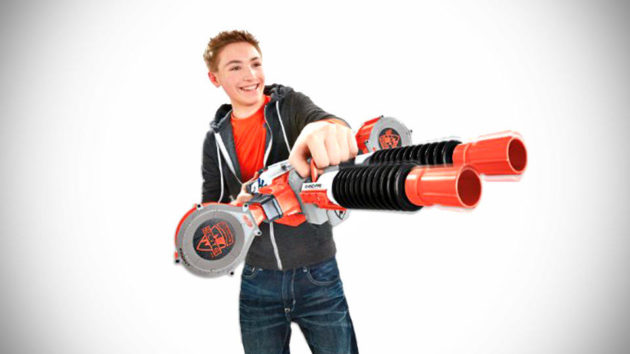 via Blaster Labs via Geek