Google Pixel 2 is no doubt the highlight of Google’s October 4 event, but apart from the drool worthy smartphone, Google has also announced several noteworthy gadgets and these include a mini version of Google Home called, well, Google Home Mini, a super sized Google Home called Max, a new Pixelbook, an updated Daydream View, as well as a thing called Google Clips, which is basically a very tiny camera that’s designed to seamlessly pipe clips to your phone. The latter is probably a ‘test’ gadget before Google decides if it is here to stay like the Google Home. 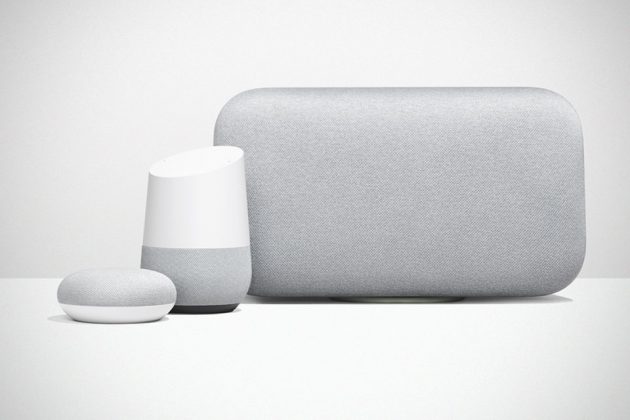 Google Home Mini is Google’s answer to Amazon Echo Dot. About the size of a donut, it is super tiny and a hell lot sleeker (IMHO) – lent to it by a fabric enclosure which is transparent enough to allow both light and sound through it. Under the skin are LEDs that light up, indicating that your Assistant knows you are within range. The flat, curved design delivers 360-degree of sound while far-field mics help isolate your voice from music and other background noise, so the little guy will always hear what you have to say. Mini comes in three colors: Chalk, Charcoal and Coral, and costs $49.

On the other end of the spectrum is the Google Home Max. Max is, as the product name suggests, a super sized Google Home. It aims to redefine audio with a dose of Artificial Intelligence and promised to hi-fi audio – the biggest and best-sounding Google Home device yet, powered by the Assistant, courtesy of a pair of 4.5-inch high-excursion woofers and two 0.7-inch (18 mm) custom tweeters inside its acoustically transparent fabric-wrapped sealed rigid housing. An onboard AI enables Max to adapt to you, your environment, your context, and your preferences, and do things like automatically adjusts for where it is being placed in a room.

In this way, there’s no need to mess with manual adjustment or tuning when you decided to relocate Max to another corner of the room. Max is outfitted with Bluetooth for wireless audio streaming, but it also has an auxiliary port for piping music from non-Bluetooth sources. In the design aspect, Google Home Max, like the Google Home and Mini (and pretty much anything Google these days), are super sleek and interestingly, it is designed to be placed both vertically and horizontally. Max is available in two hues: Chalk and Charcoal, priced at $399 a pop. 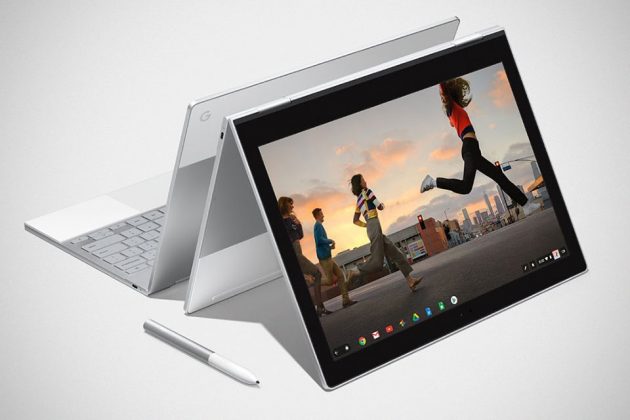 Made no mistake. This is Pixelbook, not a budget Chrome-powered laptop. Google refers it to as a high-performance (read: flagship) Chromebook that stakes claim as the first laptop with the Assistant built-in and the fist to support the new Pixelbook Pen. It is also the thinnest and lightest laptop Google have rolled out, coming in at mere 10.3 mm (0.40-inch) thin and tipping the scales at just 1.1 kilograms (or about 2.43 lbs). Similar to some of its Windows competition, the new Pixelbook is a hybrid which means, it can be use as a laptop, or as a tablet, depending on your needs. With this 12.3-inch device, you basically have one less gadget to own, well, kind of.

Specifications include a 12.3-inch QHD LCD with 2,400 x 1,600 pixels (235ppi), 7th-gen Intel Core i5 or i7 processor with support for 4K output, up to 16GB RAM, a choice of 128/256/512 GB SSD, dual speakers for “better surround sound, four-microphone setup to mitigate noise during video calls, a beautiful, squarish aluminum unibody construction, glass details with Corning Gorilla Glass, dual band wireless 802.11a/b/g/n/ac with support for 2×2 MIMO, Bluetooth 4.2, backlit 19 mm pitch keyboard, edge-to-edge trackpad with etched glass surface, Google Assistant key, a 720p60 built-in camera, TPM Chip for on-device security, two USB-C ports and a 3.5 mm headphone jack, a 41 WH battery good for up to 10 hours of use time, and finally, there are, of course, a bunch of sensors as required when it is being used as a tablet. 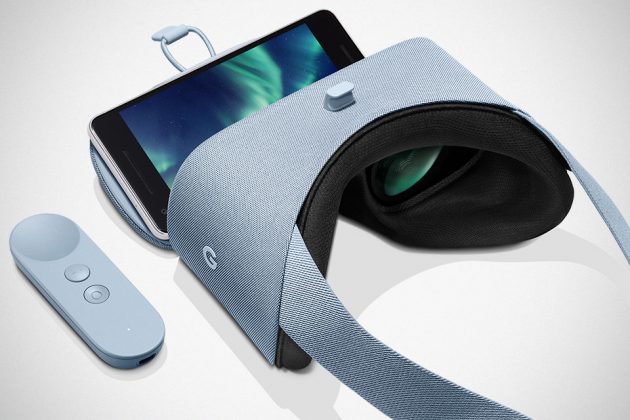 Well, nothing much here. It is just the Daydream View introduced last getting some tweaks. In Google’s own words, “keeping the best parts of the original and made them even better.” And this originals include giving it high-performance lenses to improve on image clarity and a wider field of view. The updated Google Daydream View now flaunts a premium two-tone fabric that gives the headset a softer and lighter feel, and in three new colors: Fog, Charcoal and Coral. It looks like Google’s design has this thing for fabric, eh?

The new Google Daydream View is expected to be available later this year in several countries, including the U.S., the U.K., Canada, Germany, Australia, India, Italy, France, Spain, Japan and Korea, with an associated price tag of $99. 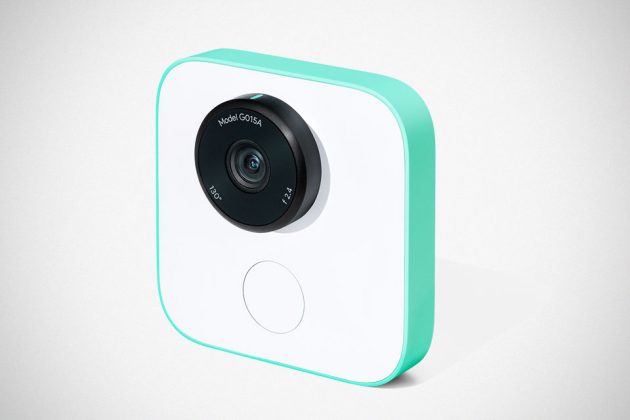 Last but not the least is the Google Clips, a super tiny video camera embedded with machine learning and AI. Unlike life logging cameras which records continuously, Clips is a smart little guy that picks the good moments to capture. The machine learning abilities in it are able to sniff out stable, clear shots of people you know and does this with your help. It learns from what you normally take, for example, capturing your son’s jumping on the trampoline, and it starts educating itself the person, so the next time, your son comes into view (and hopefully something memorable), it will record it. So, yeah, it can learn to recognize faces. Yikes.

As creepy as it may sound, it may be a convenience for those who are obsessed with capturing every moments. However, there’s no worry of your clips get stolen. After recording, Clips can be synced wirelessly to the Google Clips app on your Android or iOS device, but that will only happen by your choosing. In other words, what it shoots, remains on the device until you say so. Google has kept things very simple. To save or delete clips, all you have to do is swipe on the selected clip. With the app, you can also pick out an individual frame and have it save as a high-resolution still image. FYI, Google Clips retails for a pretty hefty $249 when it becomes available.

And finally, here’s a summary video of everything Google has announced, entitled The 2017 Made by Google Family: