scouting your prey in the dark can be an expensive and unfruitful event. seriously, if you think about it, the initial investment for a night vision mono- or binocular is not cheap and even if you have that already, you’d be just watching and not be able to relive those moments at a later time. thankfully, there’s the Night Vision Scope Camera that is not only affordable, but also one that allows you to observe and record. costing a mere 19,800 Japanese money or around 195 bucks, it offers seven adjustable IR levels for night observation and packs a 1/5″ CMOS sensor for capturing stills of 640 x 480 resolution and videos of up to 640 x 480 resolution at 25 fps. though it is noteworthy that video footage does without audio, which can be quite a bummer for some. the device offers 3X power telescope and 2X digital zoom for observing and recording distant objects and has an effective visible distant in the dark of up to 100 meters (330 feet), which should be ample for most regular applications. 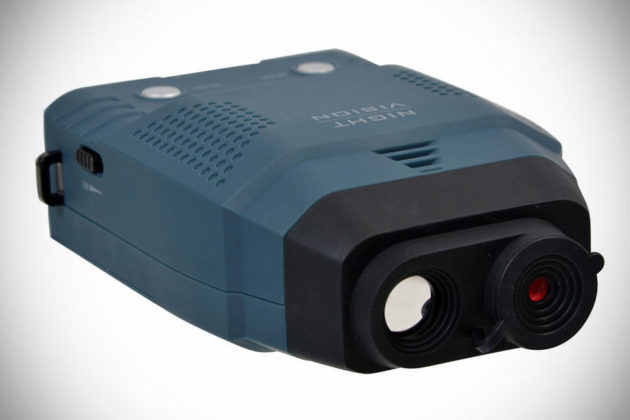 there’s no onboard storage though; storage of digital content is via a microSD card slot that supports up to 32GB. as a boon for field use, the camera is powered by four AA batteries, thus saving you the hassle of recharging. each fresh pack of batteries provides around three and half hours of usage time, so a few packs should have you covered for the night or two – assuming that you intend to glue that thing to your eyes all night long. slap on the included IR cut filter and this device is also good for day time use too. other finer details include eye relief for comfortable viewing, 14-degree field of view (not really fantastic, but i guess it will had to do), USB interface, strap loops, and built-in standard camera mount for use with tripod. the only let down is, it appears to have a plastic body which naturally, won’t be as resilient as those ‘tactical’ products but then again, we talking about a product that will achieve similar results at a fraction of the cost. so who’s complaining? i know, i am not.