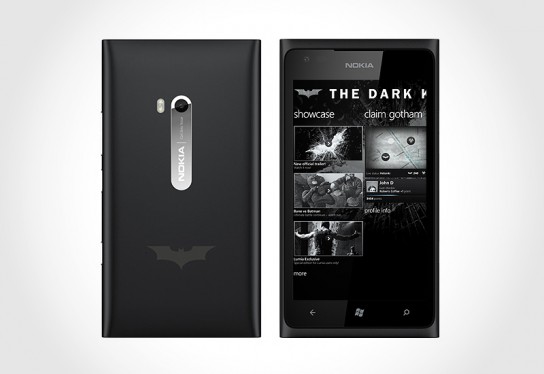 would Bruce Wayne use a Windows Phone? maybe, maybe not but one thing is for sure: he will not be using one that has his Batman logo blatantly slapped on it, like this Nokia Lumia 900 Dark Knight Rises Limited Edition. following the special edition Lumia 800 (also in the Dark Knight Rises guise) introduced late last year, this special edition Lumia 900 features the Batman logo laser engraved into the back of the phone. other goodies include The Dark Knight Rises app that offers exclusive content, a location-based The Dark Knight Rises challenge (powered by Foursquare), Nokia-exclusive behind-the-scenes mini-movie, cast info and last but not least, wallpapers and ring tones based on this third and final installation of Chris Nolan’s Batman trilogy. the phone is available only from Phones 4u (UK) starting from June 1st and a SIM-free version will be offered with a sticker of $758 by June 15, presumably in UK as well. no word on its availability in the U.S. or globally, though.