Nutella is much loved by nearly everyone. We can’t think of anyone who doesn’t like Nutella unless, of course, they are allergic to chocolate and/or hazelnut. However, with great love comes great threat and by threat we meant to say, it can be gobbled up by another hazelnut spread craze and before you know it, you may be opening the pantry to an emptied Nutella jar. Any sane man certainly don’t want that to happen and that includes German furniture designer Daniel Schobloch’s friend who were facing a Nutella crisis: his friend’s children threatens the very existence of the home’s beloved Nutella. Lucky for this friend, Daniel’s ingenuity lead him to create Nutella Jar Lock, an acrylic contraption designed to enable the lid to be secured by a padlock to stop Nutella “thieves” from having their way. 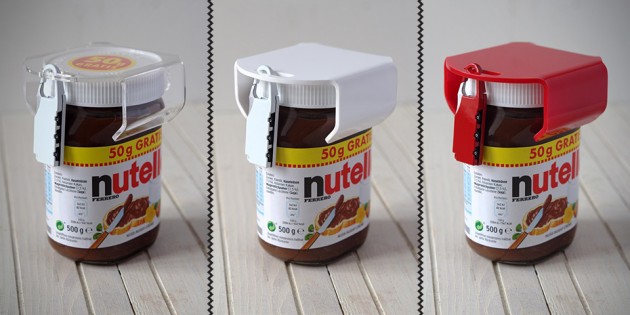 Clearly, the Nutella Jar Lock was meant to be a joke, but as fate would have it, it kind of took off and Daniel began selling this seemingly mundane device on eBay. The locking device comes with a padlock and two keys for securing your favorite breakfast spread, but as Daniel noted, it is not entirely foolproof as “acrylic is easy to break into.” That said, we can imagined those relentless Nutella-chomping monsters, i.e. your children, on the patrol in your house may just crack the lock at some point. But hey, a preventive measure is better than none, isn’t it? If you share the same crisis as Daniel’s friend, the good news is, you can actually buy the Nutella Jar Lock over at eBay for €9.99 (around US$11) a pop. Note: number lock version is also available, in opaque red or white, for a tad lesser at €9.95.

NOW READ  By The Power Of Asgard, This ESC Key Cap Is Being Smashed By A Very Tiny Thor Mjolnir