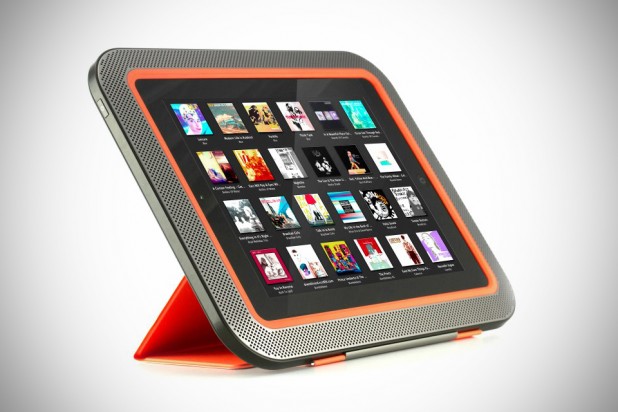 it is no secret that iPad audio performance is anything but loud or fantastic which is a real mismatch with its beautiful high resolution display. this is where the ORA Sound System for iPad might comes in handy. with the ORA, your iPad will be instantly equipped with an array of eight front-facing speakers encased in a beautiful aluminum case which also doubles as an iPad protective case. an optional Smart cover-style magnetic protective cover offers a complete protection while doubling as a stand for your ORA-equipped iPad. the eight speakers are complemented by a hand-tuned digital signal processor (DSP) that controls the 3D stereo expansion, giving you an immersive stereo audio enjoyment regardless of whether your iPad is in portrait or landscape mode. the ORA is powered by its own lithium-ion battery and therefore, it won’t drain your iPad’s juice. speaking of which, the designers even taken to pain to match the ORA’s battery performance to that of the iPad’s which happens to be up to 10 hours of usage. additionally, ORA employs the same 30-pin connector as your iPad, eliminating the need for extra charger and/or cable and this very same cable will charge both the ORA and the iPad simultaneously. other key features include a 3.5mm audio headphone jack for private listening, battery status button with LED indicator, hard buttons for volume control and power on/off and of course, a look to please any style-conscious folks (needless to say, us included). the ORA Sound System for iPad is currently on crowdfunding platform Kickstarter seeking your support and you can yours for as low as $99 each. check out a pledge video after the break.