Pacific Rim may not be a sellout in its home turf, but with some 400 millions in worldwide box office taking thus far, some parts of the movie certainly deserve to be immortalized like what Iron Man has been doted with all this while. speaking of immortalizing, what could be more awesome than having the stars of the show (no! not Charlie Hunnam! though, we sure won’t mind a Rinko statue), specifically the nuclear-powered massive robot Gipsy Danger, cast with all its likeness, into a display statue? if you are on the same page, then you will be glad that you can pre-order this towering 20″ statue now from Sideshow Collectibles for a pretty massive $399.99, but do note that you will have to wait till May 2014 for the pre-order to be shipped.

this USA mark 3 Jaeger statue is among the collection of Pacific Rim statues developed in partnership with director Guillermo Del Toro, which means you can expect nothing less than awesome movie-accurate details going into the statues. judging from the initial product image, we can expect a battle-weary mark 3 Jaeger, complete with battle scars and worn paint works, perched on some life-like jagged landscape (the underwater landscape, perhaps?) that sits on a turbine-like base. also available for pre-order are the Aussie’s MARK V jaeger, Striker Eureka ($399.99) and two monstrous creatures aka Kaiju, Knifehead ($379.99) and Slattern ($469.99). 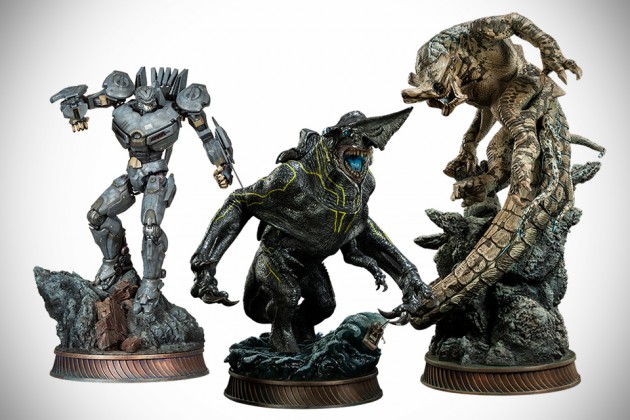 NOW READ  You Can Create A Mini (LEGO) Me At LEGO Stores In Amsterdam, Berlin And Düsseldorf