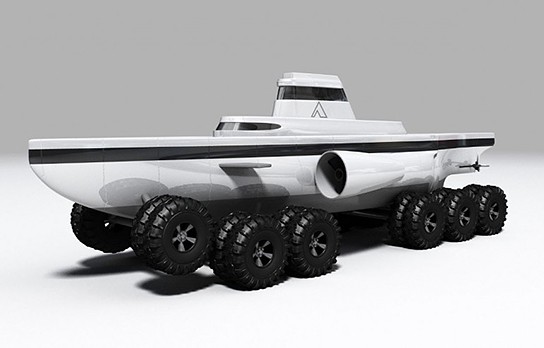 from the British designer who dreamt up of the Halo Intersceptor, comes a submarine that crawls the ocean floor with either wheels or tracks – literally. sounds ridiculous? or perhaps it sounds like a vehicle from the 1960s sci-fi movies? nevertheless, whatever we think, it doesn’t stop Phil Pauley from dreaming up this vehicle, dubbed the Pathfinder. the Pathfinder will take part in an imaginary Transatlantic Seafloor Research Challenge where the sub will be driven along the ocean floor for as long as possible, traveling from the United Kingdom to the United States in the fastest possible time. this imaginary endeavor will takes between two to four weeks, during which the sub is expected to be remain submerged. during this period, the sub would be supported by ROV-equipped surface vessel providing critical power and life support systems to the Pathfinder via umbilical cable.
[ad#Google Adsense-text-468×60]

the sub will be electrical powered, and will maneuvers the seafloor via its four wheels or tracks or a combination of both. the Pathfinder measures between 10 – 15 meters, will also incorporate one rear and at least two side propulsion system to facilitate movement in water when required. there will be three crews: the pilot, co-pilot and a communication engineer. these guys will have to live and breathe together during this duration and all waste generated shall remain within the sub. doesn’t sounds like a bright prospect to me. however, the Pathfinder will be equipped with an emergency escape device to extract the crews out in case of an emergency. hmmm, does sewage leakage considered an emergency? it better be. we love the design, regardless and we applaud Pauley for daring to dream. check out more images of this dream vehicle below.