According to wikiHow, there are a few key elements in making a viral video and it includes, but not limited to, simple idea, tacky, and most often then not, funny. South Korean music maker and singer Psy can attest to some of those points when his single Gangnam Style when viral, topping YouTube views, as well as the iTunes chart. Psy’s song was very catchy, contains repetitive sentences, and the video, has dance moves that are simple yet, fun. The video was tacky in a way, but it was a tacky magnet that racked up billions of views. Fast forward to today, we may be witnessing yet another viral music video in the making but this time, this song is no commercial hit like Psy’s. 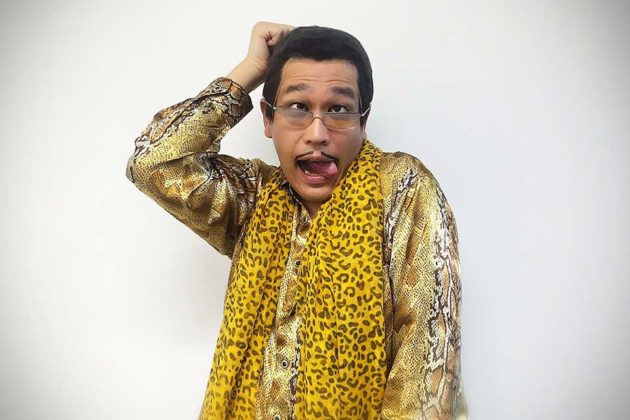 The song called Pen Pineapple Apple Pen, or PPAP in short, embodies elements that would fit the bill of a viral music video. It was, as described by Spoon&Tamago, “infectiously addictive,” which you can’t help but to listen and view the video over and over again. The song is downright simple, repetitive and to some extend, nonsensical lyrics, accompanied by pretty tacky dance moves that could easily picked up by anyone. Also, it has a character, named Piko-Taro, who looks absolutely comical in his animal print outfit. However, unlike Psy, Piko-Taro is not a real person.

He’s a character conceived by Japanese comedian and DJ Kosaka Daimaou a while ago for a live, standup. And as you may have guessed, Piko-Taro was a hit and the rest, as they say, is history. At the time of this writing, Pen Pineapple Apple Pen by Piko-Taro has already garnered over 7 millions views and we have reasons to believe it will continue grow fairly quickly as news of this cheesy video spreads. Scroll down to view the video yourself and try not burst out laughing…

NOW READ  DeLorean DMC-12, The Car Made Famous By Back To The Future, is Joining Forza Horizon 5