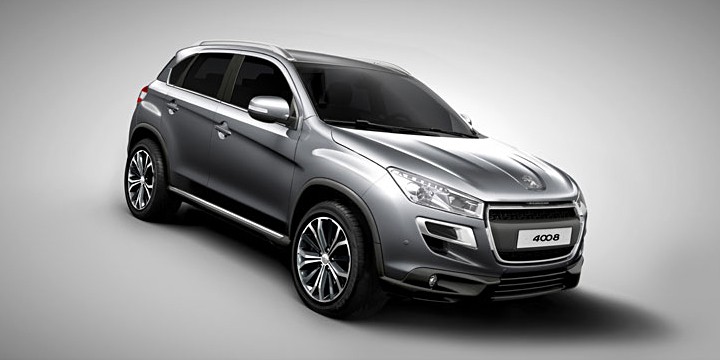 with the world fast turning into a concrete jungle, you’d be hard pressed to find a good off-road spot for some back-to-the-nature motoring. this is specially true for small countries but that doesn’t stop us from dreaming about beautiful four wheel drive machines like the new 2012 Peugeot 4008 SUV. based on the Mitsubishi ASX platform and first debuted at last years Paris motor show as a concept, it is finally seeing the light of the mass market sometime in the second quarter of 2012. with the inclusion real-deal four wheel drive system that features three transmission modes: 2WD, 4WD and LOCK, you know Peugeot is dead serious about giving the 4008 a real off-road capability. the 4008 will be available in petrol and diesel models with two capacities to each.
[ad#Google Adsense-text-468×60]

for the petrol department, it will be offered in a 1.6-liter engine that puts out 116 horsepower (85 kW) and 152 Nm, mated to a five-speed manual gearbox, and a 2.0-liter version with 150 horsepower (113 kW) and 198 Nm on the tap, with a choice of five-speed manual or CVT. as for the diesel variant, it will have a 112 horsepower (82 kW) HDI FAP motor that generates a good 270-280 Nm with overboost six-speed manual gearbox, and for those who needs a little extra power and torque, there’s the 1.8-liter HDI FAP, mated to a six-speed manual transmission, that develops a good 150 horsepower (110 kW) and a pretty impressive 300 Nm of torque. if you are a staunch believer that SUV should only be a 4X4 variant, then here’s the good news for you. the 4008 will only be offered as in its 4X4 form in some countries, including Europe.

on the exterior, expect aesthetic like LED daytime running lamps, body sill protectors, wheel arch protection trims, 18-inch alloy wheels, masculine bonnet grooves and style line that extends to the rear wing – basically, everything that makes it look this gorgeous. moving on to the interior, customers can expect glass panoramic roof, LED lights for reading, touchscreen navigation system, reverse camera, chrome accented interior, soft texture fascia, and lacquered black decoration centre console. before the Peugeot 4008 4X4 SUV goes on sales, it will make its public debut at the 2012 Geneva Motor Show. blast past the jump for a piece of PR information and a tiny gallery of this beautiful four wheel drive vehicle.

With its distinctive, stylish appearance and its 4×4 SUV features, the 4008 is a modern response to the needs of all-terrain vehicle customers, in a very prominent market segment.

International launch
The world market of all-terrain SUVs has been growing strongly since 2005.  In Russia, all-terrain vehicles have long been predominant and currently account for 20% of the market, the majority being vehicles in the compact SUV segment. However, in China and Western Europe the market share of the SUVs has reached 10%, and covers a variety of expectations. In Europe, this market share of the SUVs in segments C and D is increasing to the detriment of the SUVs of the E segment.  In China, it is the attraction of the vehicle’s status that is sought after. In Europe, it fulfils the desire for distinctive multipurpose vehicles, compact and with an environmental impact comparable to that of a conventional saloon.  Therefore, the 4008 is an ideal response to the changes in these markets, it is a competitive vehicle serving the marque’s ambition in the international market. Presented as a world première at the 2012 Geneva Motor Show, 4008 will go on sale initially in international markets from 2012 second quarter.

A complete range of all-terrain vehicles
With this new 4×4 SUV, Peugeot completes its range of vehicles suited to the various expectations of all-terrain customers. With its strong personality, for the international destinations, the 4008 is aimed both at customers who already own an all-terrain vehicle and at those looking for an alternative to Saloons or MPVs, a vehicle synonymous with leisure.  In Europe, it is targeted more specifically at customers who appreciate a strong and dynamic ability, with dimensions suited to multi-purpose use and efficient fuel economy. In addition to the 4007, but also the 3008 and its recent HYbrid4 version, the 4008 fulfils the expectations of the different markets showing strong growth in the compact SUV segment.

A distinctive style
Born of the PSA – Mitsubishi partnership, the 4008 naturally has a strong Peugeot identity. The new stylistic codes of the marque are judiciously adapted, such as the floating grille and the feline design of the lamp units with visual signature: at the front, a line of LED daylight running lamps that complement the headlamps and three red claws sculpted rear lamps. The off-road character has been emphasised by adopting a vertical design of grille, inclusion of body sill protectors and prominent wheel arch protection trims, to accommodate large wheels enhanced by the sophisticated design of the wheel rims. The almost-horizontal bonnet grooves and the style line – which extends to the rear wing where it descends again crossing the lamp – are a distinctive feature and appear to hollow out along the body side, accentuating the strong and dynamic aspect of the 4008.

Excellence and range enhancement
The work carried out by the design style team, down to the smallest detail, gives the 4008 a high class elegance in line with its positioning. The exterior is, among other things, set off with chromed components and the interior ambiance is enhanced by the choice of materials, like the soft texture fascia, to the instrument panel visor and the lacquered black decoration of the centre console. A glass panoramic roof provides extensive light for the occupants in the passenger compartment and is supplemented with side LEDs for night/dark light illumination for reading. With its particular style, strong and distinctive, the 4008 is firmly rooted in the world of the compact SUV. Its features and its equipment – like the Open & Go system, 18″ alloy wheels, a touch screen navigation system, and reversing camera – are a result of the Brand’s modernity and upmarket vision of all-terrain vehicles.

Multipurpose, comfortable SUV
The platform of the 4008, taken in part from the 4007, has been reduced in length by shorter front and rear overhangs (-30cm in length).  Its long wheelbase and its wide tracks have been retained to guarantee good occupant space in the front and rear. These characteristics and its exterior dimensions – 4.34m long, 1.80m wide with a height of 1.63m – make the 4008 particularly versatile. Its compactness – a promise of true manoeuvrability – and its occupant space make it a vehicle suitable for everyday use, including in town, and for leisure journeys or holidays.

A range of performant engines adapted to the market There will be four engines,

For Europe, the 4008 will be offered with the two HDi diesel engines. In the other countries, it will be marketed with the most appropriate power train(s). With the 1.6l petrol and HDi diesel engines, the environmental performance of the 4008 is among the best in the segment.  So the 4008 merits its status as a modern SUV and its place in the heart of our cities, just as much as a conventional Saloon.[/toggle]