The BeachBot here maybe a robotic turtle that have an uncanny resemblance to a sinister Pokemon monster, but it is actually as harmless as a dove. A refreshing change from what we have covered thus far with regards to robotic development, eh? You know? Nothing to do with war and stuff? Yea. A change is good. The BeachBot here, which is a joint development effort between ETH/ Zurich and Zurich division of Disney Research, is clearly designed for entertainment, well, maybe with a little artistic value in it. We wouldn’t call it cute – just look at its ‘face’; it really does look like one of the creatures from Pokemon, but it serves its artistic purpose despite the less-than-friendly ‘facial’ appearance. Instead of legs for mobility, the BeachBot has big fat wheels and a smaller, but no less fat, wheel upfront, and as it moves along, a rake rigged behind it serves as the ‘pen’ where it ‘draws’ by controlling the pressure on the rake. 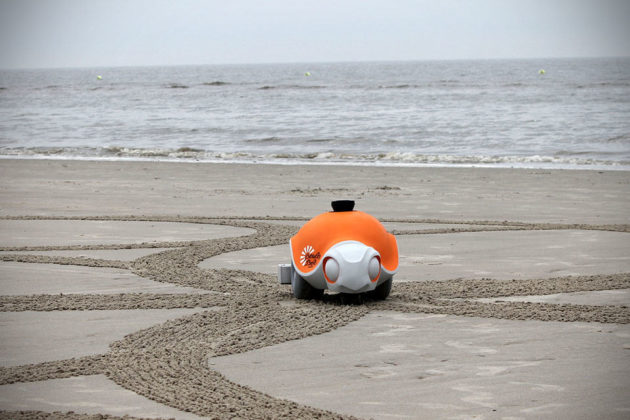 The rake is no ordinary rake; it has individually controlled prongs that allow each to be lowered or raised to form thick or thin lines on the sand. This mechanical artistic, shelled reptile can autonomously create huge sand drawings, simply from the input sent to it from a smartphone or tablet. But for now, it can’t unleash its artistic flair without some form of guides, and this instance, four poles form a 10 -by-10-meter ‘canvas’ where the robot will ‘draw’ on. With the poles in place, the robot uses a laser scanner hooked up to an onboard computer, along with WiFi and an inertia measurement unit, to determine where the canvas is and work to translate the pictures into drawing by navigating and adjusting the rake according as it moves along. 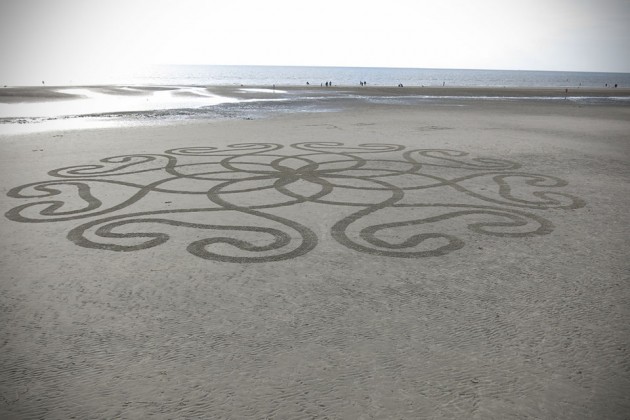 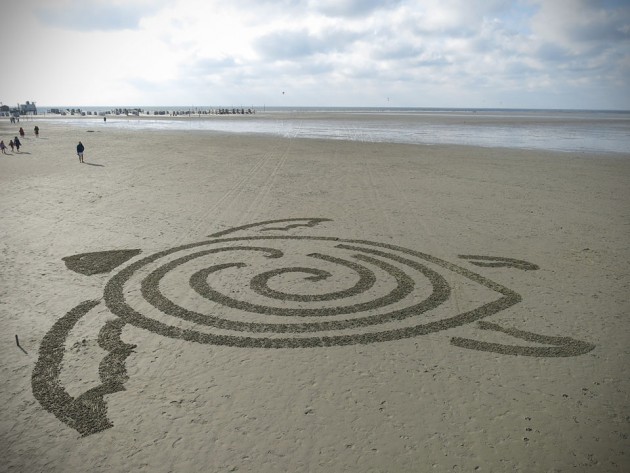 So what’s the purpose of this robot? Well, according to Paul Beardsley, a principal research scientist at Disney Research Zurich, the idea is to build a robot, or an artist robot to be more precise, “that could keep creating new artwork.” Sand was, or in this case, beach, was chosen because of its impermanency, providing an infinitely reusable canvas. Well, if only Land Rover knew about this, maybe they could draw the iconic Land Rover Defender with this instead of using actual cars with rakes? Nah. Probably not. For now. Mr. Turtle here can’t handle kilometers of drawing. But who knows it eventually can? Cos’ Beardsley and his team have dreamed of creating stunning drawings as big as the Nazca Lines. Keep working on it, folks. We want to see a replica Nazca Lines soon. Keep going for a video to catch Mr. Pokemon Monster in action.