Michael Crichton’s Prey painted a grim picture of swarming robots. While grim, it presented a not so pleasant scenario, swarming tiny robots are probably the future and Rolls-Royce is one organization that shares this vision. The aircraft engine maker envision a swarm of collaborative miniature robots inserted into the engine to perform visual inspection of hard-to-reach areas. Each tiny robot measures around 10 millimeter in diameter and they will be deposited into the engine by another bold Rolls-Royce vision, a ‘snake’ robot called FLARE.

The swarm robots will allow visual inspection of the engine without having to remove it from the aircraft. However, the swarm robots’ task is limited to inspection. They may work with alongside yet another robot, called INSPECT robots, which are essentially a network of ‘periscopes’ embedded inside the engine. With INSPECT, it can inspect itself to pick up and report any maintenance requirements. The visual data collated by these pencil-sized robots would be used “alongside the millions of data points already generated by today’s engines as part of their Engine Health Monitoring systems.” 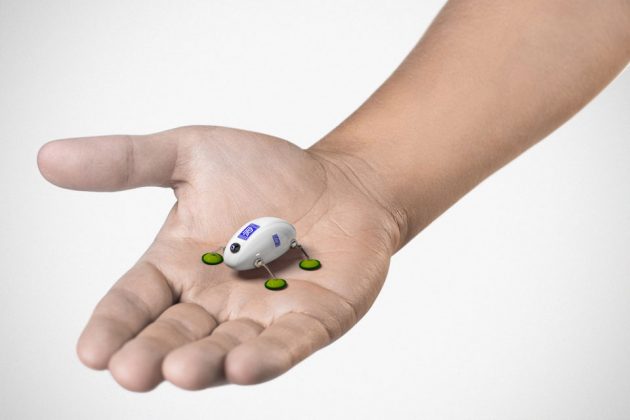 So far, swarm robots and INSPECT capability is limited to inspection. The real patching and repair works will be undertaken by FLARE (the ‘snake’ robots). In addition to dropping off a bunch of tiny robots, the flexibility offered by FLARE allows it serve as an endoscope of sort and even collaborate to carry out patch repairs to damaged thermal barrier coatings. As for other repairs, Rolls-Royce will have what it calls Remote boreblending robots. Here how it works:

“…a robotic boreblending machine that can be remotely controlled by specialist engineers. In practice this means that complicated maintenance tasks, such as repairing damaged compressor blades using lasers to grind parts, could be completed by non-expert ‘local’ teams who would simply install the tool in the engine and then hand control of it over to a dedicated expert back in Rolls-Royce’s Aircraft Availability Centre who would then direct its work remotely.”

OK, maybe Remote boreblending robots are not the robots like swarm robot or FLARE, but who knows in future, swarm robots could be tiny technicians that can do repair down to the nano level? I mean, it is totally possible that future engines and aircraft parts are of nano technology, which may allows for self-inspecting and self-healing, while serious damaged could be repair by a swarm of robots rapidly, even when the aircraft is in flight. It is totally plausible it will happen. Damn, I am so sharing Rolls-Royce’s vision.

Rolls-Royce calls these sci-fi-ish future tech “IntelligentEngine” vision and while it might sounds very science fiction-ish, these tech might very well be the future.