after nearly a year on the market, the GALAXY Grand is set to be succeeded by the recently announced Samsung GALAXY Grand 2 smartphone. the new Grand not only has a .25″ bump in the screen size, but also has a faster quad-core processor running at 1.2GHz. its 5.25″ HD display has a 16:9 ratio that kind of geared towards entertainment on the move, i.e. watching movie, but then again, which smart handset doesn’t keep us entertained today? other stuff on the spec-sheet include 1.5GB RAM, a modest 8GB onboard storage supplemented by microSD card slot that supports up to 64GB, a 8MP Autofocus imaging device with LED flash, a 1.9MP HD front-facing camera, plus the obligatory connectivity and sensors, including HSPA+ connectivity, Bluetooth 4.0 and WiFi (supports up to wireless n), GPS with GLONASS, proximity sensor, accelerometer, light and hall sensor.

being a Samsung and a GALAXY for that matter, it will be running on Samsung-touched Android 4.3 OS, which comes with Samsung proprietary software enhancements such as S Translator, S Travel, Sound and Shot (audio tag along with you still images), access to Samsung Hub and more. to be honest, the design is pretty much the usual Sammy flair, with the back cover taking a la–Note 3 stitched faux leather styling. like its predecessor, the Grand 2 smartphone is also a dual SIM phone and with this new iteration, it also boast a bigger capacity battery, a 2,600 mAh item that’s good for up to 10 hours of playback and 17 hours of talk time, presumably on 3G. no word on when it will actually roll out, but being not a flagship, we suspect it will be real soon and when it does, it will be offered in white, black, and pink in select regions. 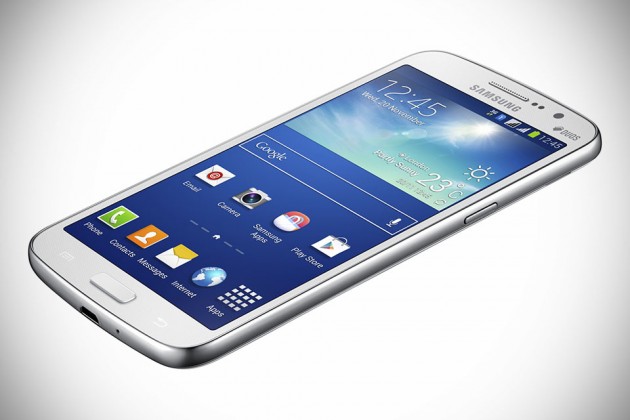