when you are a big name in the industry, it don’t matter if you are late in the competition because it is going to get the right attention anyway – like what South Korea electronics juggernaut Samsung just did, strolling into the market with its own LED Smart Bulb. these bulbs connect to your smart devices via Bluetooth, as oppose to WiFi as Philips and bunch of others had done, giving you direct control of up to 64 bulbs using an app on your mobile devices. the bulb can be dimmed down to ten percent brightness and has an adjustable color temperature ranging from warm to cool white. it also supports home automation, though that will have to go through the Zigbee Bluetooth hub which no words if it will be offered as a bundle or as separate purchase.

anyway, Sammy is boasting a pretty impressive 15,000 hours lifespan, or about 10 yeas of normal usage on each bulb. availability and pricing are to be announced. along with the announcement of the LED Smart Bulb, Samsung also announced a handful of LED lamp solutions during last week’s Light + Building 2014 in Frankfurt, Germany, including an interesting PAR-series bulb which is essentially a spotlight with its own swivel head. have a look at the PAR-series bulb after the fold. 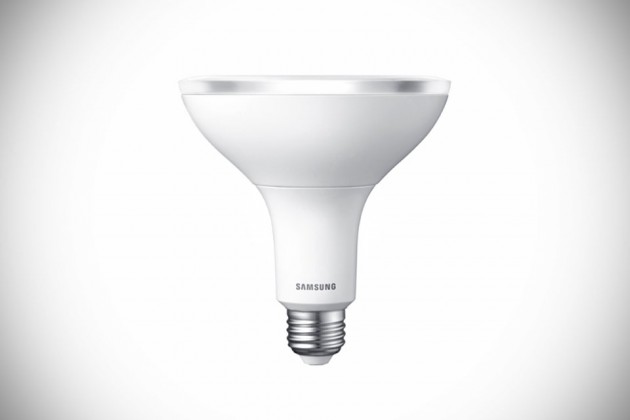