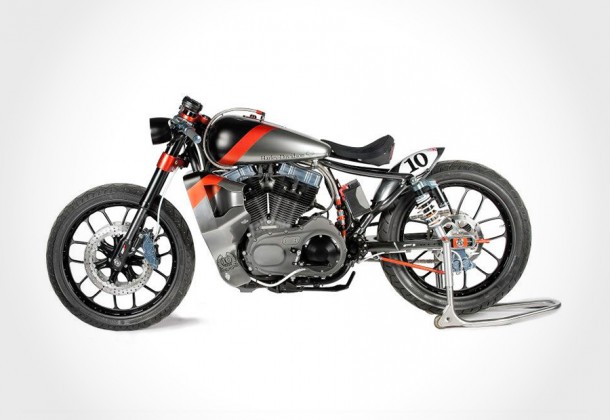 a custom performance motorcycle without the look is like a powerful computer without a decent casing. give it a mundane case, you won’t feel the kick using it. admit it. this holds true for most of us. but that won’t be the case for the Shaw F1-XLR Harley Nightster, a Harley tricked out by UK-based Shaw Speed & Custom. drawing its inspiration from 1920s Harley board racers, the Shaw’s rendition is given a smoky grey paint job as the McLaren Formula One team, accented by some touches of bright orange hue – a combination that draws us to it in the first place before we proceed to discover other hidden treasures that this awesome bike holds. it features a 1200 V-twin with a ram-air intake for improved breathing, a one-off custom set of exhaust pipes, plus details such as modified Covington rocker covers, larger pushrod tubes, and a shortened cam cover. other highlights include upside-down forks from a VRSCF V-Rod Muscle matched to clip-on bars, heavily modified seat area where the fender rails and upper rear subframe are removed, a small race-style rear fender – spruced up by number marking, extended swingarm, WP shocks, chain-driven, and 21-inch Performance Machine wheels and huge 13-inch brake rotors matched with six-pot calipers wrapped up the beautiful package. unfortunately, this British-built example turns out to be a prototype which we can only ogle over. alas, life isn’t perfect but at least we get to salivate over some beautiful images, available after the break.

via Uncrate via BIKEEXIF