I have an idea for a better aim with slingshot. Mind you. When we talked about slingshot, we are not talking about the Y-shaped contraption fashioned out of a branch of a tree. Definitely not those used by Dennis the Menace, or Bart Simpson. We are talking about metal projectile shooting contraption worthy of a hunter, complete with arm brace, powerful rubber bands and maybe even a laser pointer like the Assolar SS-12 Multi-function Hunting Laser Slingshot you see here. More on my idea later. First, we talked about Assolar SS-12 Multi-function Hunting Laser Slingshot. 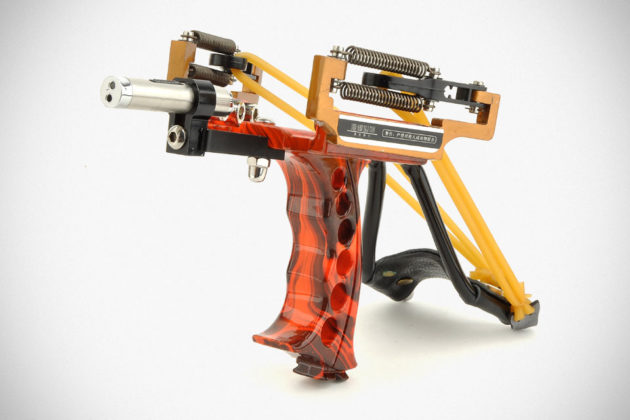 If you are into slingshot, Assolar SS-12 shouldn’t be a stranger, but if you haven’t and wanted to get into the whole hunting with slingshot hobby, well, this could be it. It looks pretty sci-fi-ish and with a stainless steel construction, this little guy should not be afraid of water, which is one of the agent that results in nasty rust. But the most wonderful thing about Assolar SS-12 is not it won’t rust; it is the ability to propel arrow too, though an arrow pad has to be used to achieve that and also, arrows are not included in the $87.98 package. 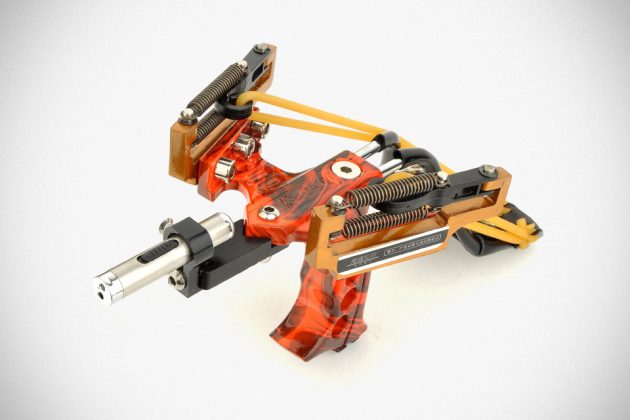 Another noteworthy highlight of Assolar SS-12 is, of course, the laser sight that aims to help you take aim to get a better shot. Then again, if you have used a slingshot, you would have known that laser helps, but it won’t guarantee perfect shots. The draw and such affects the shot and if used with arrows, wind conditions also plays a part. However, it does look kind of cool when your slingshot has a red light streaming out of it and the translucent acrylic handle also helps make the setup more alluring. While Assolar SS-12 is cool, it is just one of the many cool slingshots you can find online. Some even comes with ballbearing holder, or even a powerful flashlight, and there are some designed with reel specifically for fishing, like the Assolar SS-24.

Anyways, back to the Assolar SS-12… while it is cool and all, having a laser attachment protruding right in front of the path of the projectile isn’t the wisest thing to do. Obviously, it runs the risk of being knocked out by the projectile if care isn’t taken to avoid it. I mean, just look at it. The laser attachment is sticking out. I my humble opinion, it should be embedded into the frame of the slingshot and it will be perfect. Just my two cents. That said, maybe someday I should DIY one myself. Someday.

Amazon via The Verge.