The SmartWallet you see here may not be the most high-tech wallet we have seen, but it is no less geeky, which suits us just fine. With SmartWallet, the relation between a wallet and a smartphone becomes intertwined. No, you can’t make calls or text with this wallet. It can, however, create a bond between itself and the phone by not letting either be forgotten the next time you leave a place – thanks to the built-in Bluetooth chip. Once paired, either object will alert you if one of them goes out of range and in addition to that, you can use either to locate the other device when you misplaced either one of them as long as the misplaced item is within 150 feet range. Just use the companion app’s tap to find function to trigger the wallet’s built-in loudspeaker for easy location, or in the case of the wallet, just click on the wallet to set the phone ringing. 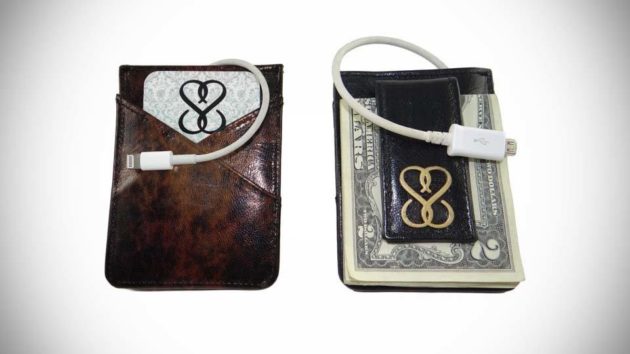 And then there is the GPS tracker, where your phone will log the last GPS location of your wallet so you can easily locate it (that’s assuming no one has beat you to it if you were in a public place). Additionally it is equipped with a 1,000 mAh backup battery that could provide your phone with up to an additional four hours of usage. Finally, all these smart features are built into a classy minimalist wallet crafted from genuine leather that still have room to hold up to 8 cards, along with some of your bills. We have seen our fair share of minimal wallets, but the SmartWallet is probably the only one to date that we can we would described as ‘high-tech’. The SmartWallet Minimalist Wallet first appeared on Kickstarter and was successfully funded sometime in early September, but for those who missed the boat, you can still pre-order it on Indiegogo in the next 59 days for an early bird price of $75, or $99, if you’re slow to act. Continue reading for a pitch video.