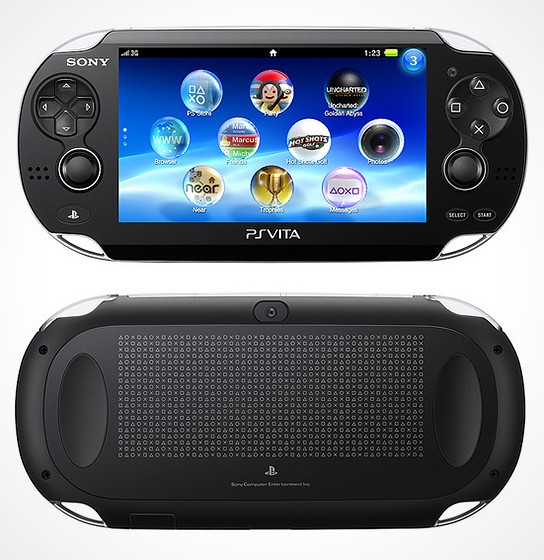 finally, official words on the Playstation Portable successor: the Playstation Vita. ‘Vita’ does sound a little off too me but according to Playstation ‘Vita’ means ‘Life’ in Latin which is what this next-generation portable entertainment system is all about. the PSVita as it is called, features a 5-inch multi-touch enabled organic LED (OLED) display and an unique multi-touch pad on its rear. Sony has also incorporated sixaxis into this device, thus allowing tilting to be included in games.
[ad#Google Adsense-text-468×60]

beside the familiar hard buttons, Sony has also incorporated two analog sticks which enable a wider range of game genres. however, the highlight is perhaps its ability to utilize the multitouch for gaming. perfect for lopping grenades and maneuvering across ridges. powered by ARM Cortex-A9 core processor, the PSVita also features two cameras (front and back), built-in stereo speakers and microphone and built-in GPS. game data storage is through the PSVita card slot and a memory card slot.

the Playstation Vita (PSVita) will be available globally starting the end of this year with retail price of $249 and $299 for the WiFi only model and the 3G/WiFi model respectively. check out a clip on this exciting portable gaming device after the break. (note: if you don’t see any video, try refreshing this page to reload)