So far, the closest thing you will get to being a ‘real’ Pokémon trainer is a Pokédex-like smartphone battery case and a Pokéball power bank which obviously can’t be thrown like the ‘real thing’. But this thing here, the Real-life Motion-sensing Pokéball, is something that is designed to be thrown and catches Pokémon too. In other words, it is an accessory for those who take Pokémon Go a little too seriously. With an enclosure made out of soft rubberized foam material, this real life (and functional) Pokéball is packed with accelerometer and Bluetooth module to enable you to throw a tangible ball at the Pokémon that appears on your Pokémon Go game.

When you hurl the ball towards the Pokémon, your smartphone’s rear-facing camera will pick up where the ball goes, translates and integrates with the game environment. Here’s how it works according to its enterprising inventors:

“It actually pairs with the App and you can throw just as a real trainer would. We use a complex list of technologies to do this. But it boils down to using the same technology that powers SnapChat’s face detection. If you add that with the data we get from accelerometer, plus a two way detection from Bluetooth, we can create actions in the game based on it’s pinpoint location from the camera.”

Ok. Maybe these Pokémon scientists didn’t quite touch on the actual technicality of this real world Pokéball, but if the campaign is to believe, it seems to be working as it should. The folks even have working prototypes to show which, btw, is required by Kickstarter. Anyways, we won’t say it is the definitive invention for Pokémon Go, considering that you will have physically retrieve the thrown ball, which is something you probably won’t want to do after walking miles in search for rare Pokémon and hatching eggs. Thankfully, you have the option of not physically throwing the ball; it works with gesture too, which means, with the ball in your hand, you will only need to make the motion of throwing the ball without releasing it to achieve the same effect. 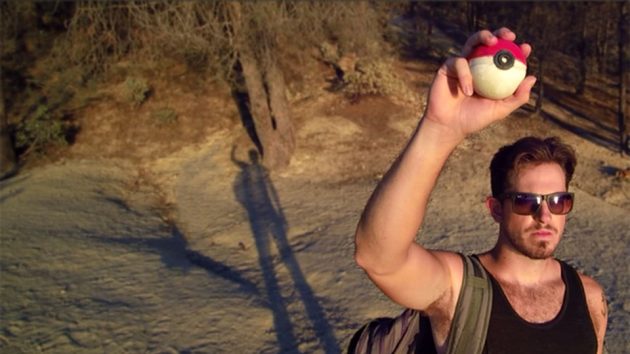 And when time comes to recharge your smartphone, this Real-life Motion-sensing Pokéball also serve as a power bank, charging your device up to two times. If anything, at least you are getting a power bank that looks the part and won’t break when dropped. Speaking of dropping, its inventors claim that the ball is impact rated and so, it should be able to stand up to any Pokémon abuse. Like we said, it is probably not the definitive invention for Pokémon Go, but it is more of a novelty.

Anywho, if you tired of flicking your index finger, then you may want to consider helping GamerReality, the outfit behind this real-life Pokéball, to make the product a reality by backing its crowdfunding campaign. And the price? 35 bucks or more. So far the reception is kind of lukewarm, but in case the campaign made it, you could be receiving the ball as early as December 2016. Hopefully, by then the Pokémon Go rage is still burning high.