docking and undocking the display to turn your laptop into a tablet and vice versa may not be exactly the best option. you know how it is like. what if somewhere along the way you need the keyboard, but it was undocked and left at home or office? not good at all. which is why Sony thinks a slider (Sony is calling it “Surf Slider”) may be the way to go. meet the Sony VAIO Duo 13 Hybrid Ultrabook, a pretty Windows device that can transform between a Ultrabook and slate just by sliding the integrated keyboard in and out. clever idea, but will it be too hefty? as it turns out, this hybrid ultrabook managed to keep a watch on its weight, which is just about 1.35 kilograms. well, as a tablet it’s on the weighty side, but it is still considered light by ultrabook’s standard. when in its slate form, you can draw, sketch or write memos using a pressure-sensitive digitizer stylus (otherwise known as ‘pen’).

powered by up to Intel Core i7-4500U processor with up to 8GB RAM, the Duo 13 is packed with features one might expect from today’s portable computer which includes a 13.3″ 1080p TRILUMINOS display for mobile with X-Reality and capacitive touch, backlit keyboard, a 8MP rear-facing camera and a 2.07MP Full HD front-facing camera – both powered by Exmor RS for PC sensors, built-in ‘CamScanner’ that supports Optical Character Recognition (OCR, with searchable text), stereo speakers with ClearAudio+ mode, 3G/LTE radio, AC adapter-powered WiFi router for creating on-the-go hotspot, SD card slot, HDMI out, the usual slew of sensors and connectivity (USB 3.0 ports, WiFi+BT, GPS, NFC, accelerometer and all that jazz), and most importantly, it has an impressive 15-hour battery life. well, at least on paper it looks to be that way. like the VAIO Pro, this Duo 13 Hybrid Ultrabook will also be available this month with a sticker starting from $1,399. 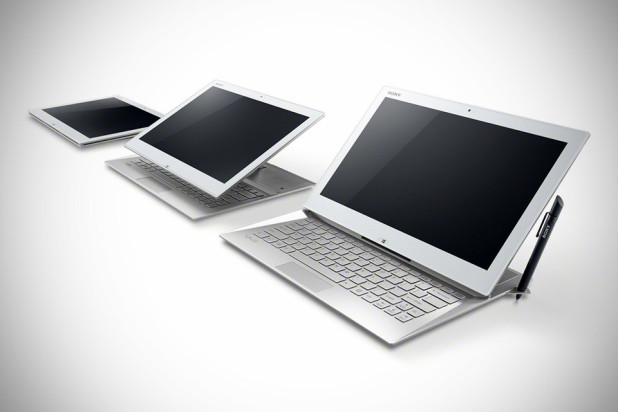