Sony will be beating Samsung in outing the flagship Android phone of its own next month. billed as the world’s best camera and camcorder (yes. camcorder!) in a waterproof smartphone, the Sony Xperia Z2 is packed with delightful features, including a 5.2-inch Full HD TRILUMINOS display for mobile with Live Color LED powered by, you guessed it, X-Reality for mobile and powered by a 2.3GHz quad-core Qualcomm Snapdragon 801 processor with a whopping 3GB of RAM. as good as those specs sounds, it still can’t distract us from what its imaging department has to offer. the Xperia Z2 smartphone is fitted with a massive 20.7MP Exmor RS for mobile CMOS image sensor, paired to BIONZ for mobile image processor and G Lens, that is totally capable of capturing video in 4K resolution, topped with Sony’s SteadyShot.

also incorporated into the flagship device is the world’s first Digital Noise Canceling Technology in a smartphone (also found in the Z2 tablet). visually, it sports a Sony-sleek OmniBalance design, featuring a slim form factor with glass panels encased in a single, solid aluminum frame and is built to IP55/IP58 rating for resistance against dust and water. other key features include up to 16GB of flash memory (expandable up to 64GB via microSD card), 4G LTE radios, a 2.2MP Full HD front-facing camera, GPS with A-GPS, ANT+ wireless technology built-in, Bluetooth 4.0, DLNA certified, MHL support, NFC, screen mirroring, WiFi, built-in FM radio with RDS, S-Force Surround Sound with Clear Audio+ (plus of bunch of other ‘Clear’ technologies) and xLoud, a high-capacity 3,200 mAh battery, and the usual slew of sensors that you have come to expect in today’s smartphone. global launch will kick off in March. 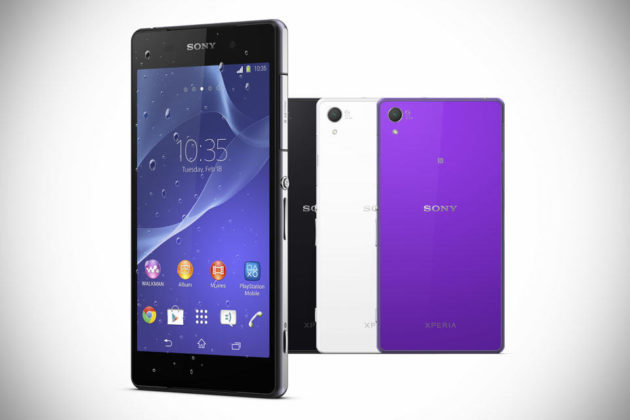