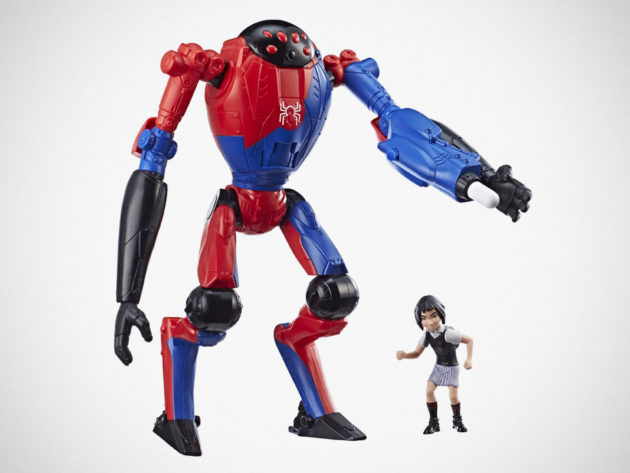 In other words, it will be one hell of a spider adventure. Beyond the new tidbits about the animated movie, there’s no visualization of how those new characters will look like, well, that’s until now. Hasbro has joined in the spotlight with the unveiling of Spider-Man: Into the Spider-Verse toys. Granted, so far, only two characters have been shown, namely, Peter Porker’s Spider-Ham and Peni Parker’s SP//dr. The former is, if you don’t already know, is a spider that got bitten by a radioactive pig, turning him into a, well, Spider-Pig, duh… and the latter was another Spider hero (or in this heroine and a very young one) originally debuted in 2014’s Edge of the Spider-Verse miniseries.

Peni, like all Spider-heroes was bitten by a radioactive spider and that very spider was also part of the mech suit’s CPU. Unfortunately, Spider-Man Noir was not revealed, at least not that we know of anyways. For the sake of goofiness, I am kind of looking forward to the Spider-Pig, but on a collectors’ stand point, I am very sure the la-Frank Miller Spider-Man Noir will be worthy of collection – even as an action figure. Well, that’s it for now.

If you want to learn more, you may be interested in these articles from io9 and Polygon. In the mean time, here’s a pre-San Diego Comic-Con official trailer of the Spider-Man: Into the Spider-Verse to get you all wet with excitement (it sure did for me).