If Chewbacca aka Chewie aka Wookiee were to exist in real life, I am sure he will be an easy find among the crowd of non-furry beings. But if you place him in one of the Star Wars’ universe such as Tatooine and throw in a mix of characters from the galaxy far, far away, then that may be a challenge. That’s exactly what Star Wars Where’s the Wookiee Search and Find Book (Egmont Books, ISBN-13 978-1405277334) is about. In the spirit of the Matin Handford Where’s Wally? aka Where’s Waldo? series of children’s books, this Wookiee version challenges you to snoop out the galaxy’s famous furry biped partner-in-crime against the backdrop of the many Star Wars iconic scenes, including the aforementioned Tatooine, plus Endor and more.

If you think it would be easier than hunting for Waldo, think again. To prove our point, we suggest you give it a go with the two sample pages we got here (click on the image for larger view). Tell us how you fare, would you? Here are the official words:

Chewbacca, a notorious rebel ally, is wanted for crimes against the Empire. Not often seen without his partner-in-crime, Han Solo, this Wookiee has evaded capture on multiple occasions, due in no small part to the fastest freighter in the universe, the Millennium Falcon. Chewie, as he is more commonly known, has a sizeable bounty on his head. Can you find this furry criminal before other accomplished bounty hunters beat you to it? A uniquely illustrated search and find format, perfect for Star Wars fans young and old!

Really for the challenge? Then you may want to pick up a copy of the Star Wars Where’s the Wookiee Search and Find Book off Amazon for a mere $10.99. Also, we may have spotted in the Jawa Market, but we not sure where’s he is in the trees of Endor. 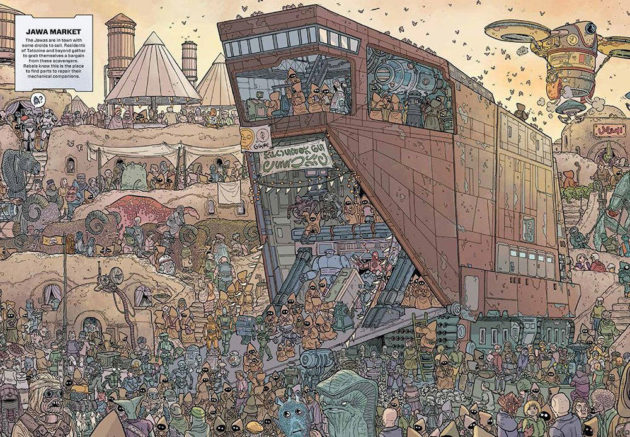