with no less than 20 birds in its arsenal, Swann is certainly no stranger to RC flying toy (even one that drops bubbles!), but a quadcopter is something new to the lineup, which is what makes it worthy of a mention. looking like an aircraft that pops out of a sci-fi movie, the Swann Quad Starship RC Quadcopter is propelled by four rotors, each having its own protective guard. under the hood, it features Swann’s Easy Fly Gyro technology and along with four-axis control that allows ease of control and multi-direction maneuverability. it can ascend, descent, propel forward and backward, straddle sideways and even perform 3D maneuvers such as flips and stunt tumbles. basically, it can do what most accomplished and expensive quadcopters can do, except that its 2.4GHz control only offers up to 30 meters (100 feet) range, which kind of like a shot in reality that this is after all, a kid’s toy. but seriously, we don’t quite care as long it is a four-channel aircraft and having 3D capability is just a bonus.

the Quad Starship has an onboard battery that provides up to 8 minutes of flight time and it takes an excruciating long 50 minutes to fully recharge, either via the AA batteries-operated remote control, or your computer using a USB cable. other than the battery lifespan and the unusually long charge time, you can expect a capable, lightweight and durable aircraft that’s suitable for intermediate pilots of age 14 and up (hey, we qualify!). the Swann Quad Starship RC Quadcopter is up for grab now from Costco for a very affordable $54.99. another look at this remote flying beauty after the break. 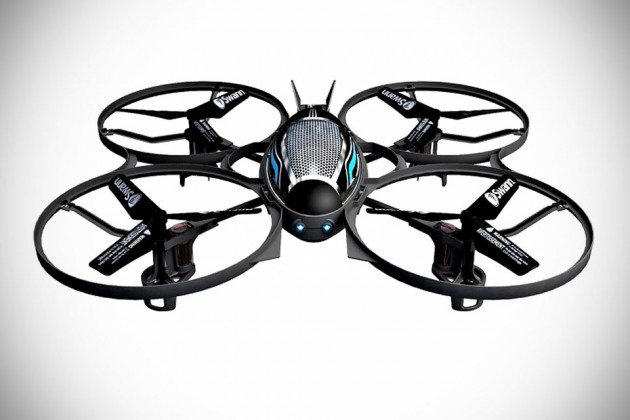