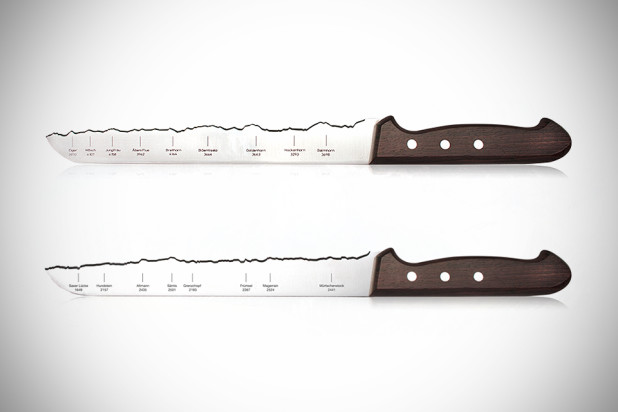 you know when they describe something as ‘the greatest thing since sliced bread’, the ‘they’ doesn’t mean to say that the ‘thing’ is better than having your bread sliced and also, it doesn’t mean that all bread will come sliced (which most gourmet bread doesn’t). speaking of which, if you prefer not to eat your loaf of bread whole and love slicing them up yourself, these trio of Swiss Alps Panorama Bread Knives should appeal to you but let it be warned: slicing bread is not a walk in the park. we perceived a skilled bread slicer as someone akin to a master sushi chef, unless squashed bread is your preferred norm. anyway, these knives feature serrated edges that are designed to look like the range of the Alps and despite its ‘undulating mountains’, they seems to be cutting pretty good (watch it in action in the video after the bread, we mean, break). the Swiss Alps Panorama Bread Knives can be yours starting from 69.00 CHF (that’s Swiss Franc, in layman currency) or about $75 in Yankee dollars, based on what Google tells us.

PS: as of now, only two models are available with another one ‘coming soon’.

NOW READ  Reasons Why Having A Pocket Knife Is Very Practical