the impressive Exosuit from Vancouver-based Nuytco Research you see here is the real life Hydro Armor Iron Man suit aka Deep Submergence Suit. however, it does not have revolutionary propulsion system that will enable it to rocket out of the water and take flight, neither does it have repulsor or rockets, but it is capable of taking a person down to a depth of 1,000 feet (300+ meters) while maintaining a comfy atmospheric pressure within. the Exosuit atmospheric diving system or ADS is more than just a vessel for going deep down where usually ROV would go; it is a six and half feet tall aluminum alloy suit, tipping the scale at a grand 530 lbs (240 kilograms), that is designed to allow scientists and researchers to poke around the deep sea, first hand, for unknown species.

the suit is specially designed to counter 30 times more pressure when at depth and features a slew of sophisticated technologies, including a 50-hour oxygen system, powerful LED lights to break through the pitch darkness of the deep sea, a teardrop-shaped viewport for wide-angle of view, communication equipment, 18 oil-filled rotary joints for smooth movement, a quartet of foot-controller thrusters for movement control, and completely dexterous hands for executing delicate tasks such such as handling scalpels and syringes, while underwater. the suit is actually a fully-certified submarine that takes the shape of a human being and is tethered to the surface via fiber-optic which gives it full network capability, allowing a suit of telemetry such as monitoring of support systems, sonar management and more, plus high-def video to be set to the surface.

the suit has been tried and tested, but it will be further put to the paces come this July when it will be used as a test tool on the Stephen J. Barlow Bluewater Expedition at a location about 100 miles (160 kilometers) off the coast of Massachusetts. with the Exosuit in place, the firm is anticipating a deep-water worked system, which is described by its designer Dr. Phil Nuytten as “the swimming model” and “lite version”, which will afford even more maneuverability. 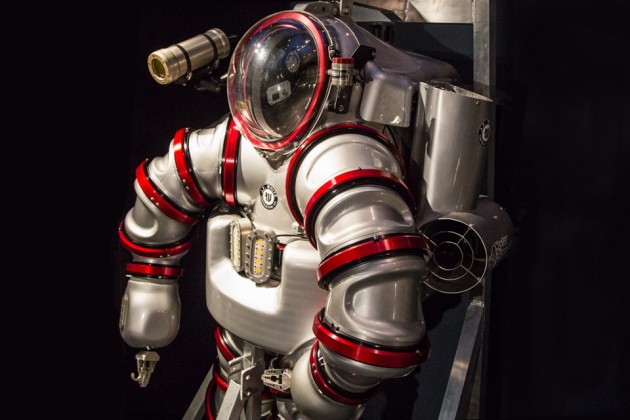