As it is, mankind are creating crap load of waste that mostly ended up in landfills and despite the myth, Earth doesn’t quite have the luxury of space for that. That said, we can all do our part by recycling or at least try to minimize the generating of waste. Don’t know how to start? Well, simple, you can start by using The Fold Up Eating Set by Fold Project at your next party, picnic or camping. As we all know, those are activities that we tend to use disposable utensils and cutlery. Not only is The Fold Up Eating Set not disposal i.e. no more throwing, it is designed to be flatpack, which saves you up to 97 percent of space and weighs in at mere 70 grams. Clearly, flatpack is way easier to bring than those cumbersome disposal bowls and plates. 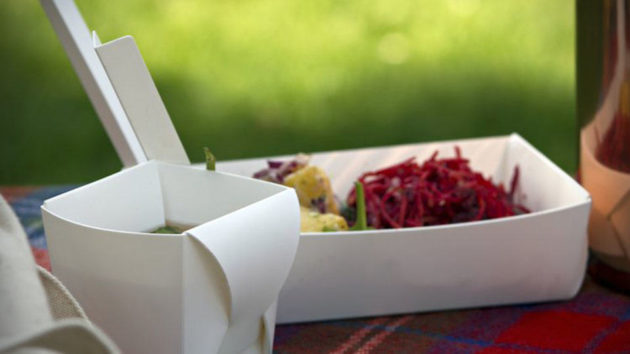 Despite its disposable look, the set is totally reusable and is dishwasher safe. Made from BPA-free plastic, it is safe for boiling water and is completely watertight so they will work just as well for drinks, soup or any sauce-heavy food. And at the end of its lifecycle, you’d be glad that the plastic is recyclable too. In that respect, you’d be generating waste eventually, but not as much, since it can be reused countless time and if you party/picnic tons, it is definitely going to make a huge impact. Each Fold Up Eating Set includes a bowl, a cup (yes, even cup!), a fork and a spoon, and a handy strip to keep them together when not in use.

Unlike many of such green projects with have seen, The Fold Up Eating Set is not a concept; in fact, it is available for sale through crowdfunding website, Crowd Supply and can be yours for an early bird price of $20. By acquiring The Fold Up Eating Set, you’re also helping the outfit to create more environmental-friendly fold up stuff and oh, it is 100% made in New Zealand.