There are some who sell used cars and then there is visual effect artist Eugene Romanovsky who, instead going through traditional medium like online classified ad, or selling to used car dealers, created a pretty out-of-this-world video to peddle his 1996 Suzuki Vitara SUV. Yup. That’s right. A Vitara, one of earliest incarnation of SUV by the Japanese automaker. However, the real star attraction of this 21-year-old SUV is not quite the vehicle itself (a ride which he described as his “best friend” for the last ten years. Cute), but it is the VFX-touched video that details its key features including chunky 235/75R15 off-road tires, the 96 HP 1.6L injection engine, a new exhaust converter that would make it “friendly to environment,” and manual gearbox with low gear. 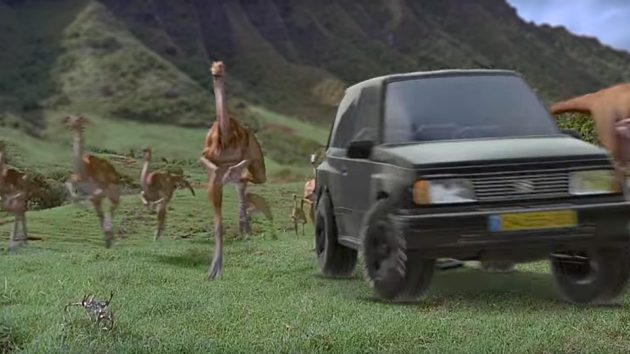 This effective VFX-heavy video which lasted nearly 2 minutes also show kind of where this trusty old SUV can go and it ranges from desert plain to the grass patches of dino land to mad rushing alongside Mad Max: Fury Road entourage. Aside from the existence of dinosaurs and probably, the crazies from Mad Max, it doesn’t seem farfetched that the Israel-based Latvian VFX artist’s grand’ol Japanese SUV can traverse all those terrains, but he took bump up the pitch several notches up by sending the CGI 96’ Vitara into to the depth of the ocean and even into space, and onto the pok-ridden surface of the Moon before appearing back to Earth in a la Back to the Future II with a pair of fiery trails behind it.

NOW READ  How Easy Will It Be To Create An eCommerce Website From The iPhone 13?

Clearly, the VFX is not of blockbuster budget, but the effort is convincing enough and more importantly, extremely captivating. It felt almost like I was watching a movie trailer and with over 2 millions views and twenty one thousands likes thus far, you know Romanovsky has won, whether or not he did eventually sell the car or not. Skid ahead for the said video.