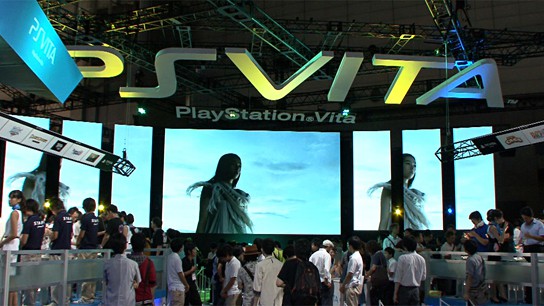 Sony Computer Entertainment had a blast at the recent Tokyo Game Show (September 15-18) and the spotlight is of course on its upcoming portable gaming device, the Playstation Vita. over 30 game titles on around 80 handheld consoles are lined up for visitors to experience the Vita themselves. many will be flocking to the Tokyo Game Show which ends on the September 18 to catch a glimpse of what’s new in the gaming arena but for those who can’t be there (like us here), do catch a video of the Sony Playstation Vita in action, along with narration from Tetsuro Sakurai (Director of Marketing Department, SCE Japan) after the break. in the meantime, here’s an except of what to expect from the Vita:
[ad#Google Adsense-text-468×60] [quote]The main feature of PS Vita, which you’ll see as soon as you pick it up, is the 5-inch OLED display. Not only is the screen big, it’s also very clear, thanks to the OLED technology. Another feature is the variety of interfaces. For example, PS Vita has analog pads on the left and right, a six-axis acceleration sensor, and GPS. This diverse combination offers a variety of gaming experiences. Finally, another feature is network access. This is the first game console with an always-on 3G network connection, so users can communicate with each other anytime, anywhere. We think this will lead to new gaming experiences.[/quote]