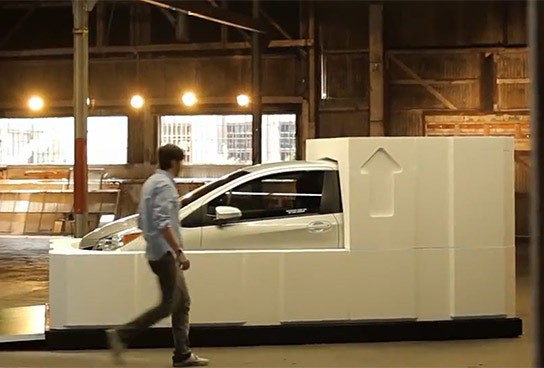 every tech person knows what an unboxing video is. if you haven’t had any idea, then you must be living in some caves off in Kathmandu’s hills. anyhow, unboxing is usually associated with tech products and at one point, YouTube seems to be under the threat of being flooded with such videos (there are hundreds, if not thousands of them) but instead of seeing tech gadgets being unboxed, it is definitely refreshing to see a car being unboxed. yes, you heard it right – a video of car being unbox. of course, we all know cars don’t come in boxes, much less a crate but it is all in name of healthy fun.
[ad#Google Adsense-text-468×60]

in this instance, a 2012 Toyota Yaris was being unboxed which the dude (did he said he was Adam Fucci?) in the video faithfully walks us through the delightful process. like any other unboxing video, he diligently shows us what’s in the box that includes an appropriately gigantic user manual, an oversized silica gel pack to keep things nice and dry, and a, thankfully, normal size car key. all things that point towards fun and cheekiness, just like what the car is about. hmmm, that does make me sounds like a car salesman, doesn’t it? enough said, so do join me for the How to unbox the 2012 Toyota Yaris video after the break.