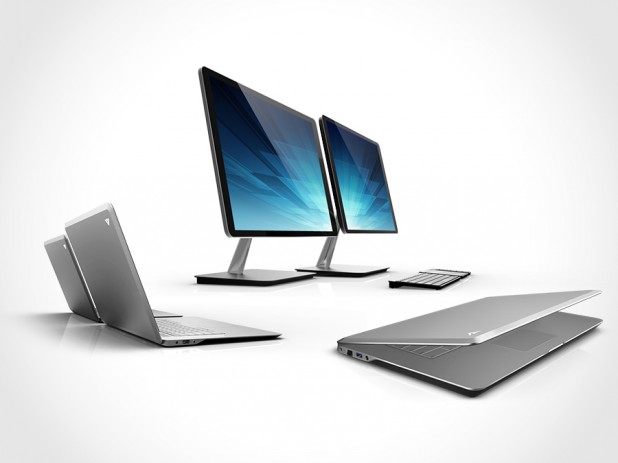 part of the draw about Mac computers is its sleek, clean design and honestly speaking, they have the most eye-pleasing aesthetic among the computers we have today, well, that’s until Vizio made its comparatively sleek PC line available to the masses. we have a sneak of these exciting release from the America’s number 1 LCD HDTV company earlier this year but never in detail. for those who are stretching their necks for this Mac-challenger (in terms of the look the department), the good news is here: the eagle has landed with more specifics and a price to go with it.

VIZIO All-in-One PC
the Vizio AIO is more akin to a TV than a computer and with features such as Full HD 1080p display, 2.1 surround sound system with SRS Premium Sound HD, along with a subwoofer (with integrated power) and a dual HDMI inputs for hooking up to entertainment media like your set-top boxes and game consoles, the Vizio AIO is pretty darn serious about keeping you entertained. other features and specifications include third generation Intel Core processors (up to Intel i7), up to 8GB RAM, up to 1TB hard drive storage and up to 32GB SSD, up to NVIDIA GeForce GT 640M LE graphics card, integrated 1.3-megapixel HD 720p camera with microphone, built-in dual band WiFi and Bluetooth connectivity, and a host of I/Os including four USB 3.0 ports, audio headphone and microphone jack, SD card reader, Ethernet port, eSATA port and of course, the earlier mentioned, HDMI ports. included in the package are a matching unibody wireless keyboard, wireless touchpad with multi-touch gesture support, and an IR remote control. and to further strengthen its role as an entertainment machine, this AIO’s display can be used even when the computer is turned off. isn’t that sweet? and all these goodies are wrapped in an extremely eye-pleasing design that has already captured our attention since January this year. the Vizio All-in-One PC is available in 24- and 27-inch models with a sticker starting from just $898.

VIZIO Notebook
sporting a very Apple-sique look with its aluminum unibody design but a lot more edgy, the Vizio Notebook is billed as Vizio’s portable powerhouse. this 2.4 kg (5.28 lbs) 15-inch laptop is powered by the third generation Intel Core processors (up to Intel i7) and features up to 8GB RAM, up to 1TB of hard drive storage and up to 32GB of SSD, NVIDIA GeForce GT 640M LE, a 15.4-inch Full HD 1080p display, 2.1 stereo sound with SRS Premium Sound HD, a 1.3-megapixel HD 720p camera with microphone, dual band WiFi and Bluetooth connectivity, two USB 3.0 ports, SD card reader, Ethernet port, HDMI out, as well as a headphone audio jack. unlike most Windows PC makers, Vizio only offers this road-going multimedia machine in one-size, which is 15-inch and like its desktop counterpart, it is configurable with a starting price from $898.

VIZIO Thin + Light
Vizio did not explicitly brand its Thin+Light as the ultrabook but its size and weight all points to the ultrabook category. available in 14- and 15-inch size, the Thin+Light also uses the third generation Intel Core processors (up to Intel i7) and features 4GB RAM, up to 256GB of SSD, Intel HD 4000 graphics, stereo speakers with built-in SRS Premium Sound HD, 1.3-megapixel HD 720p camera with microphone, dual band WiFi and Bluetooth, two USB 3.0 ports, HDMI out and headphone audio jack. the 14-inch version has a HD+ display with 1600 x 900 resolution and the 15-inch gets a Full HD 1080p display. as for the form factor, expect to be greeted by a slim 17mm (0.67-inch) thickness and 1.54 kg (3.39 lbs) for the 14-inch, while the 15-inch is a tad thicker at 17.2mm and weighs in at 1.8 kg (3.96 lbs). the Vizio Thin+Light carries a retail price starting from, you guess it, $898.