Between an Xbox 360 and Xbox One, which one will you choose? Probably the latter for obvious reasons, but what if you have some love left with the 360? Then you could have both boxes, which will solve your dilemma, but with Ed Zarick’s creation, dubbed Xbox Duo, you could have both rigs without cluttering up your entertainment console. And on top of that, you get to lug both to wherever you’re going. Xbox Duo is yet another brilliant creation by Zarick whom have previously turned an Xbox One and subsequently, a Playstation 4, into a laptop. However, this is not just another console-turn-laptop, it is a consoles-turn-laptop. Noticed the plural we used on ‘console’? So yes, it is one custom Xbox portable that packs both an Xbox 360 and an Xbox One. Whoever says you can’t have the pie and eat it? With the Xbox Duo, you clearly can. 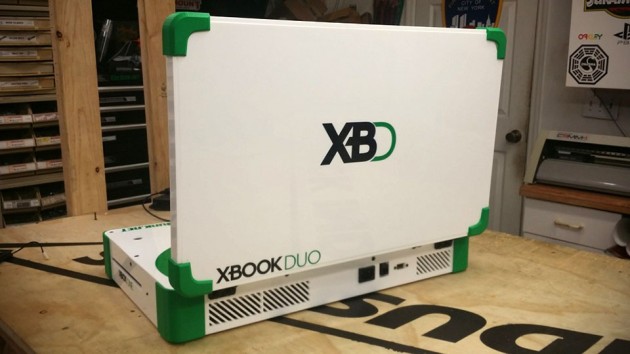 Understandably, it is going to be a little thicker and heftier than Zarick’s previous creations since technically speaking, there are two consoles stuffed inside, but it is still as portable as Zarick’s previous game console laptops. It is not like it is cumbersome or too heavy to move. It is very much mobile. This two-face of the game console world splits into two sides: on the left, it is the first generation Xbox and on the right, you will find the Xbox one. Each side has its own optical drive; a tray-type drive for the 360 and a slot drive for the Xbox One. A switch located at the top of the laptop facilitates the switching between the two consoles, while a HDMI switcher rigged to both consoles detects which console is currently in use and proceed to send the video image to an integrated 22-inch Full HD LCD display. Naturally, only one console can be running at any given time as the Xbox Duo is designed with a single power brick that supplies electricity to either console.

If you are already drooling for one, we have bad news. Sadly, the rig is a personal trophy and it is not for sale. But as always, he is more than happy to do commissions if you need to turn a game console into a laptop, but probably not two into one laptop.