The good news is, aliens have yet to invade us and this alien-like thing is actually a 3D-printed 2-string piezoelectric violin that is very much an Earthy object. Phew. So there is no cause for alarm, yet. Jokes aside, this out-of-this-world musical instrument, a 2-string electric violin, if you haven’t figured that out, is the work of Miami-based MONAD Studio and was among the five 3D printed instruments on display at the 3D Print Design Show, held in New York City this past April 16-17, 2015. During the event, guests witnessed the musical instruments in action and get to hear for themselves if the instrument does sound like anything that’s created in this world. 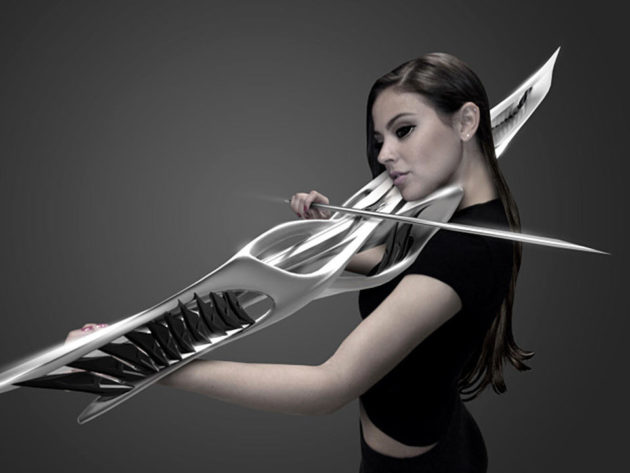 The 2-String Piezoelectric Violin is part of a framework known as ‘MULTI’ that holds four other instruments, which include a monobarasitar, a cello, a small didgeridoo, and a hornucopia. The most amazing part is probably the fact that the framework itself is also another instrument, responsible for a drone, sonic environment. According to MONAD, this and the other four instruments are in their prototype stage and they are actually available as made-to-order product.

If you are up for some truly un-Earthly musical instrument, the 3D-Printed 2-String Piezoelectric Violin, or any of other four musical equipment, will be right up your alley. While we applaud the fact that 3D printing afford us to create amazing things, it is the design that amazes us even more. Honestly, why should violin shaped like a violin anyways, well, besides being more portable than this odd-looking 3D printed example. Now, imagine a cello looking like this…