You know the classic joke about how most men tend to look at girls’ chest when conversing with them? The “hello, my face is up here, not there” comment? Well, this particular wearable that response to a person’s gaze by moving in a life-like (and rather creepy) manner should let the wearable know where the person is looking at. Ok. That’s not quite the intention of artist Behnaz Farahi when she created it, but the fact that the 3D Printed Gaze Actuated Wearable (aka Caress of the Gaze) has a camera installed at the base of the neck to detect the gaze works for the ‘is he staring at my chest’ situation too, don’t you think? 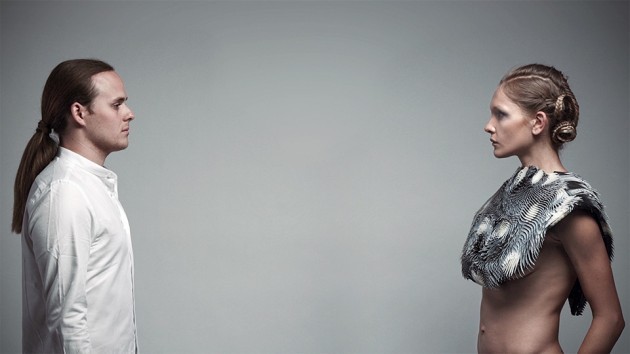 What’s more. The thing actually moves, in an undulating manner which could make the gazer feel awkward and lets you, the wearer, announce “ah ha! I caught you, didn’t I?” The wearable is in the form of a tunic (more correctly, just half of the tunic, depending on your definition) and is inspired by feathers, scales, and skin of animals. Beneath the strangely alluring 3D printed quills is a “semi-flexible mesh laced with ‘muscle wire’ that allows for the fluid movement.

According to Farahi, the can not only detect gaze, but it is able to differentiate between genders. Now, that my friend, is pretty dope tech there. But she has bigger plan; she hopes in future, the camera can even differentiate ages too. Here’s an excerpt of the rationale behind Caress of the Gaze from the horse’s mouth:

“This project offers a vision of the future by exploring the possibility of a second skin fabricated using multi material 3D printing. It engages with a series of issues. Firstly, it demonstrates how the very latest and most advanced 3D printing technologies might contribute to the realm of fashion, by exploring the tectonic properties of the materials used with Objet Connex500 3D Printers.”

The project was developed as part of Artist Residency of Pier9, Autodesk in San Francisco, sponsored by Madworkshop Foundation. As for the reality of the product? Well, it won’t be anytime soon. It is more of a concept study, I would say, but men (and ladies) better learn to respect ladies and stop staring at their chest when talking to them cos’ you never know if one day this thing may get picked up and becomes a real ‘shame men who stares at our chest when talking’ product.

NOW READ  This Is A Gundam Model, But It Ain’t A Gunpla, It Is Paper Gundam