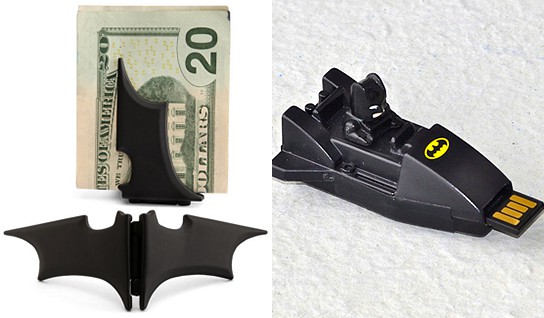 let’s face it, even a superhero like Batman will need to store some data and bring some cash when he’s out and about doing his duty. so here are two things Bruce Wayne will probably use (but can’t really do cos’ they are so going to blow his cover): a Bat Stick USB flash drive and a Batman Money Clip. you can’t deny that these items are today’s essentials which not only offers practical use but are as good as collectibles.

the first item is a 4GB USB flash drive, dubbed the Bat Stick, fashioned out from a Batman LEGO mini mobile that were issued by McDonald’s. i wouldn’t say it’s a must-have for any Batman connoisseur due to fact that this is not a factory-made product. this flash drive was created by Polyester10 and might seem a little too crude for serious Batman fans. anyhow, it will still be a nice collection for those who can never get enough of the Dark Knight.

the second item is probably what Bruce Wayne would use but discretely. however, we can use it without any form discretion cos’ obviously, we are not him. the item in question is the Batman Money Clip, a die-cast money clip in the shape of Batman’s Batarang that holds your cash neatly in place with its magnetized grip. i dare say this black matte rubberize finish money clip is one of the most stylish money clip i have ever seen. hit the jump and check out a short but hilarious video of the Batman Money Clip.

if you are huge fan of the Dark Knight, then these are two items you probably won’t want to miss. so how do you know if you are a big fan? well, if you own a Dark Knight suit (some say, costume) in your wardrobe and has the uncontrollable urge to put it on everyday, then you are qualified as an enormous fan. the Bat Stick USB Flash Drive cost $40 a pop and is available via Polyester10’s store on Etsy while the Batman Money Clip retails for $39.99 on ThinkGeek.