part of our lives is about touch. we are obsessed with it, perhaps because it proves to be a much more convenient way of getting things done and so why should the “laptop for everyone” be left without this “must-have” feature? of course, not and that’s why there is the Acer C720P Chromebook with Multi-touch Display, a touchscreen version of the C720 introduced a few months back. the C720P joins the Chromebook Pixel, which was introduced earlier this year, as the second touch-enabled Chromebook and one that truly upholds Google’s mantra of Touchscreen Chromebooks for everyone with an extremely affordable price tag of a little under $300. according to Google, over the past year, they have made optimizations to Chrome OS to make touch actions simple and intuitive, and the result will be experienced first-hand by C720P Chromebook owners.

apart from the multi-touch display, what goes under the hood remains the same with specs including a 1.4GHz Intel Celeron 2955U processor, 2GB DDR3L SDRAM, 32GB SSD, 11.6-inch display, Intel HD Graphics, a VGA camera, two USB ports (one 3.0 and one 2.0), full-size HDMI port, Bluetooth 4.0 technology and dual-band WiFi, supporting up to wireless n, and a battery that claims up to 7.5 hours of active usage. though there is one thing that had us quite confused: the C720P was listed with 16GB SSD, but on Amazon, it was actually stated as 32GB SSD. to this end, we are not sure which is the correct figure, so to avoid disappointment, you might want to clear the air with Amazon before you commit to this machine. another product look after the break. 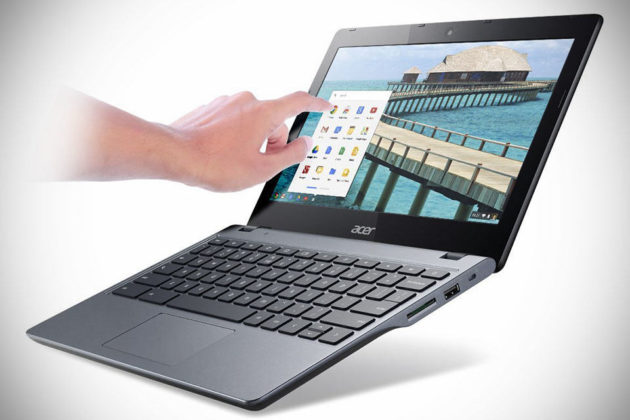