These days, accessing the Internet from the comfort of your own home network is no longer quite private as it used to be and this even more true if you are surfing on publicly available wireless networks. When on public wireless networks, there’s no telling if someone is snooping on your activity and you don’t want that to happen even if you are doing nothing illegitimate. This is where VPN comes in. VPN, or Virtual Private Network, allows you to access the web while maintaining anonymity and it also opens up the world of region-restricted websites.

VPN is not new, though. It has been around for years via both hardware and software solutions, but it was not until recent years, hardware solution become a practical way for on-the-go anonymity. The Anonabox Tunneler WiFi VPN Router is one such pocketable solution. Today, we are fortunate enough to get our hands on the said router and take it for a spin, and find out how it performs and if it meet everyday person’s expectations.

As with the Fawkes WiFi Tor Router, we are not reviewing it as a hacker; instead, we are putting it through its paces as an average joe. So, let’s start mucking around with the Anonabox Tunneler WiFi VPN Router and see what it has to give.

What is Virtual Private Network or VPN?
In simple terms, VPN or Virtual Private Network is a form of encryption method that provides secure access to a remote computer over the Internet, as such it lets you send and receive data across shared or public networks without compromising your identity. One of the much used feature of VPN is bypassing content filters and restrictions, such as region-based restrictions.

What is an Anonabox?
Anonabox is a matchbox-size hardware that offers you access to The Onion Router (Tor) network without the need for dealing with the software aspect. It does need some configuration, but nothing of sort that calls for a rocket scientist’s knowledge. In other words, it is basically your Internet anonymity on-the-go without hacker proficiency and best of all, it lets you do so without going through unreliable or shady websites or servers, or paying monthly or yearly subscription fee. That’s not to say it is free, but at least, it is a one-time payment for the hardware and that’s that.

As a rule of thumb, Internet anonymity is only possible if you don’t offer up your personal details like logging into your social media accounts and such. That said, if you choose to do the latter, then, anonymity is pretty much non-existence. 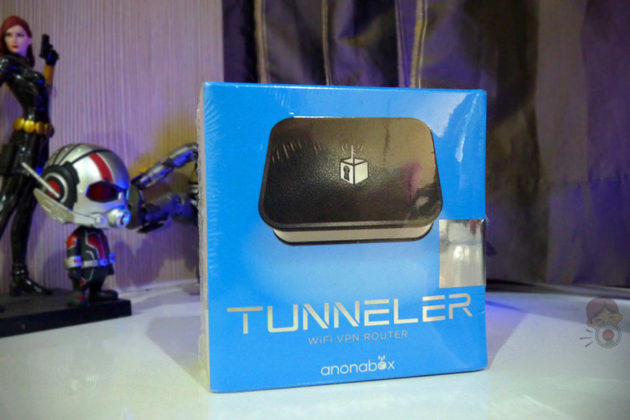 The packaging and the hardware
Anonabox Tunneler WiFi VPN Router comes in a neat, tidy box no bigger than a grown man’s hand. The box is shrink wrapped and comes with its own security seal placed in such a way that there’s no way a person can open the box without destroying the non-reusable seal. This ensures that the hardware will not be tampered with while it en routes to you. If you think this aspect is overly paranoia, just imagine buying a teddy bear that’s rigged it with a spy cam without your knowledge. Now, that doesn’t sound like fun, does it? It may sounds a little over, but like we always say, it is better be safe than sorry. 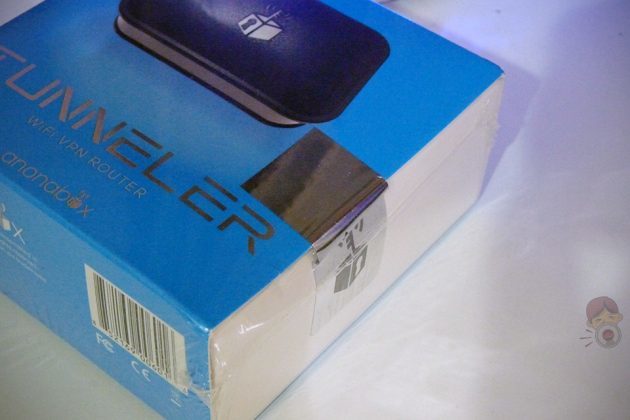 After breaking the seal and pulling the inside box out, you will find a manual, a USB power cable and the black matchbox-size hardware. It shares the same form factor and design as the Fawkes WiFi Tor Router, but instead of white colorway, it is in black with the same textured top. It is powered by the supplied USB cable, which you can plugged to one of the available USB port on your router or to your computer’s USB port. USB power adapter can also be used if you have one. But we are just going to go with the USB power for convenience’s sake.

On the hardware, you will find a LAN port, along with a reset switch for setting the Tunneler to factory defaults, and on the other end, a WAN port and a micro USB port sits alongside each other. MAC address of the WAN port can found under the device on the product label.

NOW READ  The Security And Privacy Of Smart Homes: Improve The Convenience 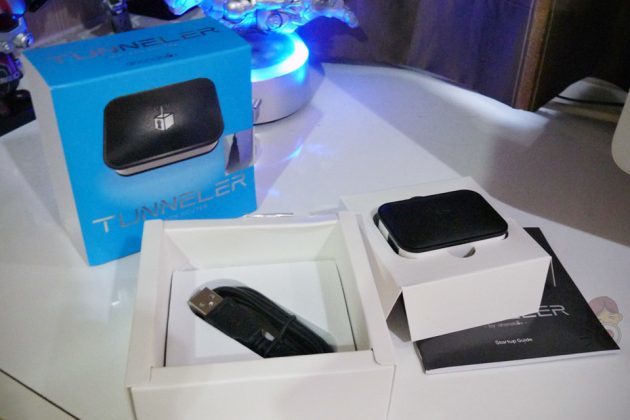 Set up and connecting
As with the Fawkes, set up is exceedingly simple. We wouldn’t describe it as a plug-and-play device as the Anonabox has described it cos’ it does need some basic configurations. Fortunately, it should be almost a walk in the park for most average joes – thanks to the super concise instructions laid out in the manual. It may be over for me to say this, but through my years of experience in setting up stuff that comes with a manual, this is by far the clearest and easiest to understand. We are confident even those with no previous knowledge about network will be able to comprehend and succeed in getting the Tunneler WiFi VPN router up and going.

The process basically involves hooking up the power, get the basic network configuration done, either through wired or wireless route and that’s about it. Of course, during the process, you get to appoint your own ESSID name, also known as wireless signal name, to whatever you fancy (this time, we have set it to ‘you-are-not-supposed-to-see-this’). It is noteworthy that the broadcast is public, which means everyone can see that you are using a separate router. 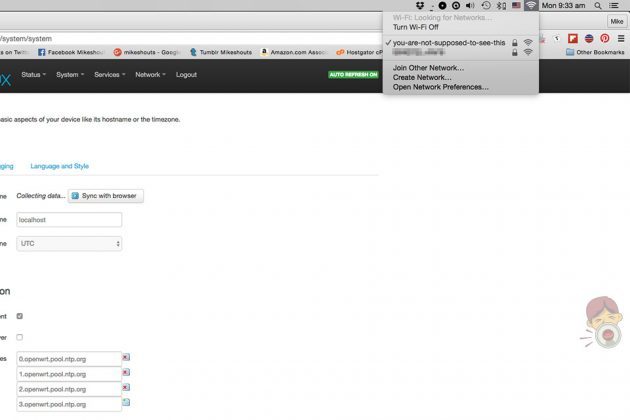 Once set up, you can choose to connect to the device to the broadband router wirelessly or via Ethernet cable (likely the former if you are hooking up pubic WiFi) and the same goes for your computer-to-the-device connectivity; it can also be wired or wireless. And oh, Tunneler also offers a few encryption types, among them is the WPA2-PSK.

The entire setup should not take more than 10 minutes, but do remember to get an Ethernet (not supplied) ready as you will be needing it for setup. Once the setup complete, you can now fire up your browser, private browser if possible, to test the Internet connection. 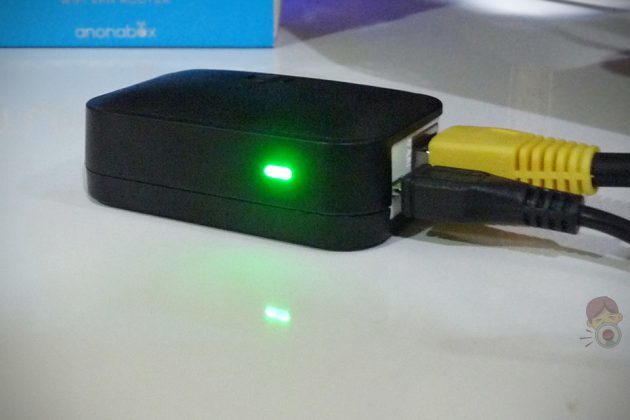 But it is just half of the story…
As far as the hardware and setup are concerned, the Anonabox Tunneler WiFi VPN Router as it have advertised – except for one thing: VPN does not come as standard. What we have done so far is just prepping the hardware for VPN services. The user interface does offer two options, one provided by Hide My Ass! (or more politely, HMA) and the other is OpenVPN, which is kind of reserved for advanced users. The latter lets you configure the Tunneler to your preferred VPN service provider. So, as you can see, it is not exactly free per se as you does need to have a VPN service in your name, be it free or paid, and not all VPN services support OpenVPN or OpenWRT.

But… that’s not the entire story. Under the configure VPN in the manual, it says “Activate your VPN service account by following the instructions on the included insert,” which we didn’t find any insert or whatsoever. So, we not being able test it out. We have our own VPN service, which is web- and app-based, but it does not support OpenVPN configuration. We know there’s a collaboration between Anonabox and Hide My Ass! but it is not explicitly expressed if the VPN service is included (I think it supposed to, but the review set seems to be missing it).

This part of the setup is definitely the most confusing, made worst by our frantic search for the elusive ‘insert’. I know, we should have touch base with Anonabox but we did this review as a one-sweep thing and we most certainly don’t want to break away from it and do something else. We tried configuring HMA, but we noticed it needs an activation key which we lack (I supposed it is in the ‘insert’?), but that does not detract the simplicity in setup and use of the Tunneler and if I dare say, of all its product.

Anywho, if you are up for it, you can pick up Anonabox Tunneler WiFi VPN Router from Anonabox website for $99.99 a pop.