Forget what you know about go-karting. Those fossil fuel guzzlers that kick out choking fumes are so passé because there’s a new kid in town that is going to change the way you look at go-kart – if you can catch glimpse of it. Meet Daymak Blast Go-Kart C5, an electric go-kart that’s so fast that it will make bystanders enviously dizzy. How fast you asked? How does 0-60 in 3.9 seconds sounds? That’s pretty darn fast. No. Wait. It should be count as stupid fast, really. 3.5 seconds is like far quicker than most performance rides you find on the road!

Oh, what? 3.5’s no good for you? Fret not, there’s an even faster model, aptly denoted as ‘Ultimate’, that catapults from 0 to 60 in a blinding 1.5 seconds. Now, let that sink it a bit. One point five seconds! That’s like beyond supercar’s acceleration. Hell, it is even beyond the realm of hypercar. That right there is superbike kind of fast. Holy smoke! If my local go-kart track have either one, then you bet I will be a member for life. I am not even kidding. 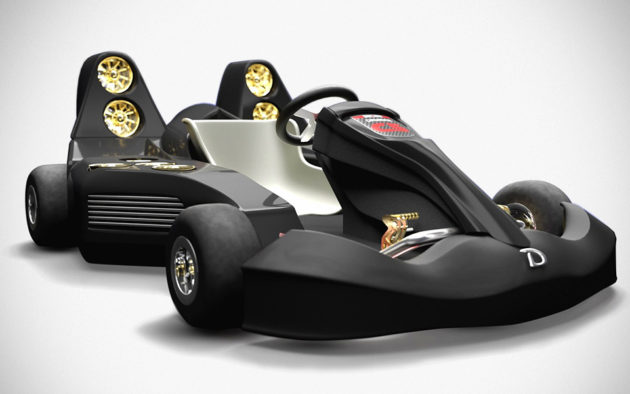 But how could Blast Go-Kart C5 possibly make that number? Simple. Lightweight and electric, and in this case, a 48v/10kW brushless DC motor paired with 2,400Wh combined lithium Panasonic cells made it possible. In between, it get a Daymak Drive 96V 400A controller and a liquid cooling system to ensure everything runs like a clockwork without acting up. The Ultimate edition has some extras which, to be honest, I didn’t quite believe my eyes when I first saw the specs.

It has a bunch of EDFs on it. Yes. Electric Ducted Fan. The same kind that you see powering RC aircrafts. Imagine that! And it has twelve of them, each regulated by a Hobbywing HV 200A platinum ESCs (electronic speed controllers) and powered by its own 5,000 mAh battery. All in an effort to make the Ultimate super light and therefore, super fast. Madness.

You know what I think? I think Daymak Blast Go-Kart C5 Ultimate is practically an aircraft. Just reverse the aeros, stick it with wings and it will probably lift off. However, with crazy speed comes crazy price. While the Standard version commands a modest $9,999, the Ultimate version costs as much as a Porsche, coming in at a whopping $59,999. Ouch.