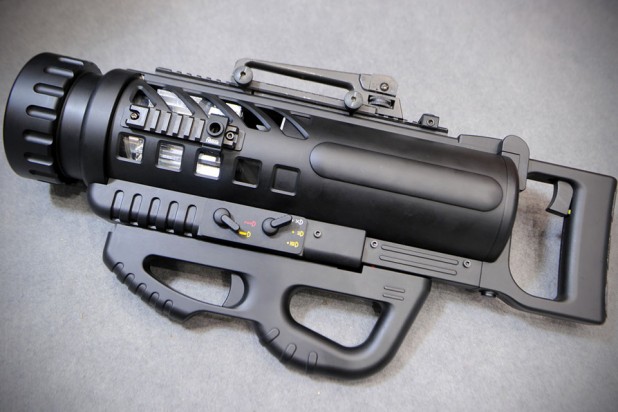 up till now, search lights have been restricted to being mounted and best mobile scenario would be a heli or a truck but the Dogstar Portable LED Search Light you see here might change all that. looking like a cross between a RPG and an assault rifle, this upsized futuristic LED flashlight is capable of a blinding 68,000 lumens of brightness which is something like 30 times more intensity than your regular tactical flashlight. as the name implies, its application is obvious: it is designed for search and rescue operations that needed the aid of a search light and presumingly in a situation where vehicles can’t access to such as caves or densely vegetated forests. other highlights include three level of brightness, two light modes, a Picatinny rails that can accommodate standard firearm accessories such as carrying handle and/or tactical scope, a shoulder stock with trigger-style light switch and a pair of assault rifle-style pistol grips with one sporting a trigger switch. weighing in at a little over 4 kilograms or about 9 pounds, it is fairly lightweight considering the power it has to offer but its compact size and lightness has a serious trade off in terms of run time: it has just 80 minutes running time when on maximum brightness, which may not be enough for a real search and rescue operation that could run up for many hours on ends. the Dogstar Portable LED Searchlight is expected to cost around a million yen (about US$12,600) a piece, though the maker has planned for an eventual availability, no word on when exactly it be available commercially.

the Dogstar Portable LED Searchlight was showcased at the Risk Control in Tokyo (RISCON) Exhibition from October 17 – 19, 2012.

via Cool Things via Gigazine [JP]