billed as the ‘The Greatest Album of All Time’ by Rolling Stone, the Sgt. Pepper’s Lonely Hearts Club Band album is one album that is absolutely hard to come by, let alone one that was autographed by all four members of the band. such is what the First Issue Sgt. Pepper’s Lonely Hearts Club Band Album has to offer, which Beatlemaniacs with pots of gold lying around can have a shot at scoring it in an online auction organized by RR Auction. as it stands, this rare collectible has garnered 24 bids and at an auction price of a cool $110,002. now, more about this signed album before you decide to drop that six-figure amount on a set of vinyl records.

the album was first purchased by an employee at the Atlantic Hotel in Newquay who was fortunate enough to get it signed by all four members of the Beatles while they were staying there between September 12-15. the rare example released by UK Parlophone Records features a vibrant full-color gatefold signed by Paul McCartney, John Lennon, and Ringo Starr in dark ballpoint, and in black felt tip by George Harrison. the latter resulted in some faint mirroring of Harrison’s signature on the opposite site of the gatefold, which is totally unique to this particular copy. this item is accompanied by a handwritten letter of provenance, dated 1985, from the original recipient of the signatures (the employee at the Atlantic Hotel) and a letter of authenticity from noted Beatles expert Frank Caiazzo.

the record comes in a red and white psychedelic inner sleeve on the right side of the double-sided sleeve, and the original full sheet of card cutouts remains in the left. though due to its age, this item does suffer from some scattered light edge creases, but that does not make it any less collectible or desirable. according to Caiazzo, “fully autographed Sgt. Pepper’ LP covers are quite rare and considered by many collector’s to be the ‘Holy Grail’ of signed Rock and Roll albums.” 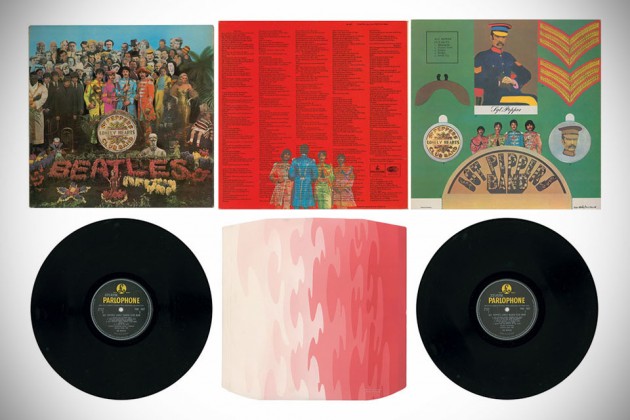