While drones based on multi-rotor setup are being use in a variety of fields, including leisure, they have proven themselves time and time again that they are not the safest flying contraptions. Clearly, the immediate danger pose by such air vehicle is the high speed rotating blades which can cause serious harm when come into contact with humans or other properties. Personally, I had been cut by a drone at low power, but that was enough to dig up a tiny bit of skin, so you can imagine a direct hit could be near catastrophic. With the Fleye Personal Flying Robot, it eliminates that risk all together. About the size of a regulation size soccer ball (23 cm, or 9 inches), Fleye (pronounced as ‘fly’) relies on a single shielded propeller for flight, while four control vanes affords stability. 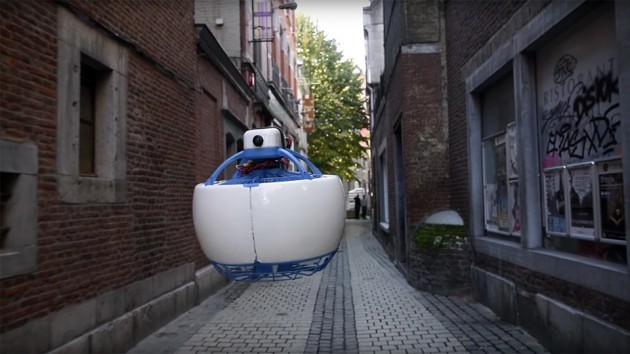 Since the single rotor is shielded and encased in a ball-like shell, it can never hurt anyone and logically speaking, it should be the safest drone on the world. With Fleye, it kind of makes toys Air Hogs’ look dangerous. So what makes Fleye ticks? Well, despite of the modest size and weight (it tips the scale at just 450g), it packs a host of components to enable it fly autonomous, including an onboard Linux-powered dual core computer with 512MB RAM, no less than seven sensors (accelerometer, gyroscope, sonar and more), a 5MP camera with 1080p videoing capability, a WiFi module and a swappable battery, each good for 10 minutes of flight time when full charged. 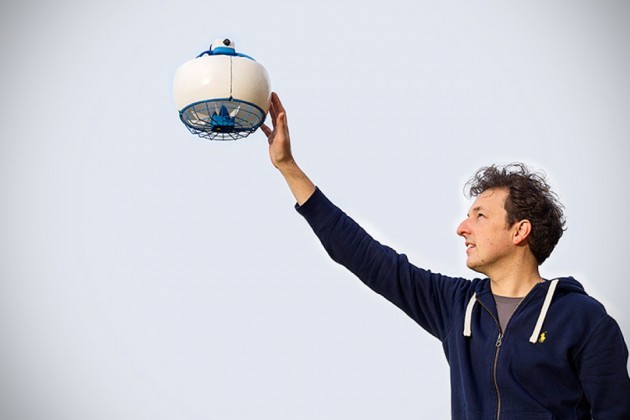 Fleye can be controlled with a smartphone using a companion, or with a Bluetooth gamepad connected to the smartphone. Using smartphone, you can choose the preset flying camera mode, or use the virtual gamepad if you are game enough for manual piloting. Finally, Fleye is also programmable so you can create custom apps to enable it to perform different duties, such as a flying security guard. Unbeknownst to most, Fleye isn’t the first ball-like flying machine. Back in 2011, Japan’s Ministry of Self-Defense also developed one that capable of 37 miles an hour flight and could even land smack on the ground before rolling to a stop unscathed. But, you can’t buy that flying ball and also, Fleye’s iteration is arguably sleeker. Fleye sure looks like stuff from the future. Now, all we need is to get that down wash out of the way and we’d have the perfect flying drone.

Anywho, if you are interested, you have 10-days to pre-order at discounted price from Kickstarter. The campaign is already funded and all the early bird perks are gone, but at the time of this writing, there are still several sets left under the “CES 2016 Special Deal”, which will run you back at €734, or about US$799, as opposed to the standard backer pricing of 799 euros, or 1,250 euros, the final retail price. Delivery won’t be too far away too as Fleye promised to do so in September this year.