The Internet’s favorite British madcap inventor, Colin Furze, has teamed up with YouTube Red to create a new series called Furze World Wonders!, featuring, obviously, the mad garage inventor himself, Colin Furze. All this while, Furze has been building for the Internet, for himself and sometimes, for his sponsors, but with the Furze World Wonders!, he will be lending a hand to everyday people, be it helping out a brother and sister to attain a Guinness World Record for the largest water rocket, building a life-size pinball machine, or creating an epic floating battle barge. To let you in more on what to expect, here are the details straight from the official press text:

“Colin Furze is known for his madcap personality and crazy backyard inventions which range from building a homemade hover-bike to creating the world’s fastest baby-stroller.  Some of the exciting things that viewers will be able to get to see in this season’s episodes include:
• Watch as Furze and his crew build an out-of-this world BMX park
• Watch as Furze and his crew builds a battleship and water cannon for a family who keeps losing their annual lake water fight.
• Palace meant for a Pooch—Furze helps a dog rescue organization build a giant dog playground.
• Panoramic Pinball—Furze and the team help build a giant pinball machine to help fans with their “Pinball for Change” event.
• Marrying in Medieval Style—Furze helps a maid of honor host an epic medieval engagement party.

Furze World Wonders is produced by 9 Story Media Group and is family viewing at its best. The series will be available to YouTube Red subscribers on YouTube and the YouTube Kids app starting today, 9/28.” 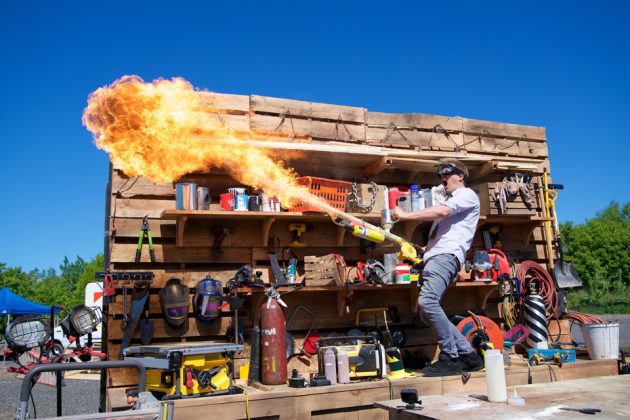 So, yeah. You will need to pay to watch, but I guess it isn’t a big deal, most folks are already forking out for cable TV (is it still a thing???). In fact, on-demand should be a lot better over cable since you can watch it whenever, wherever you desire. Anyways, for the uninitiated, YouTube Red is Google’s attempt to mimic on-demand paid networks like Netflix. It promised to deliver enhanced, uninterrupted experience across YouTube, YouTube Music, YouTube Gaming and YouTube Kids. When subscribed, it will open up a world of exclusive original series, movies crafted by your favorite YouTube creators.

YouTube Red is not available in all countries and regions though; as of now, it is only available to residents in United States, Australia, New Zealand, Mexico and South Korea with plans for additional international expansion throughout the year. Keep going for the trailer.