It has been a long while since I hit up the fairways. Apparently, things have changed quite a bit. One of the changes is, golfers can actually order drinks and food as the game proceeds on the fairway. Clearly, it was not something the follow up team of golfers would not be amused. Over at King’s Walk Golf Course in North Dakota, U.S.A., special buggy has been delivering refreshments to golfers, but it is not without its caveat. During peak times, the much needed refreshment may take as long as an hour to reach golfers. Well, that was then. King’s Walk is piloting a new delivery using Israel-based Flytrex delivery drone that could slash the wait time significantly.

While some other companies are still going back and forth with the local regulations, Flytrek managed to secure the license to operate its flying delivery drone at King’s Walk, albeit to just one location – the 19th hole – for now. The trial, which started last month, is expected to run for just six weeks. As far as golf course is concerned, it makes total sense since the regulations dictate that drone may not fly over areas with crowds of people and also, the operator will need to maintain line of sight at all times – both are guidelines a golf course can meet without much of a hitch. 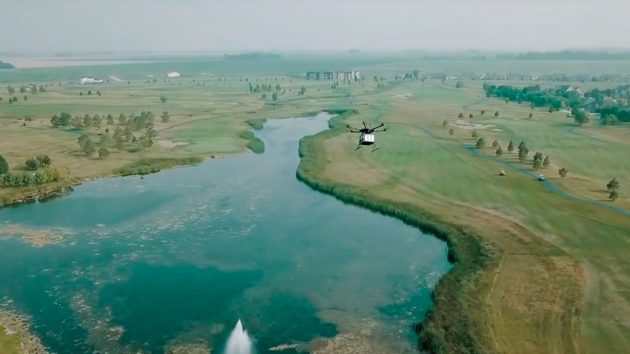 If all goes well, the company is hopeful that it will secure permission to offer its service to more “stations” along the golf course. King’s Walk Golf Course is another milestone for the company. The company has previously secured a deal to delivered ordered items using drones in Iceland, flying them across Reykjavik’s wide waterways. However, it is to note that Flytrek is not the first and the company’s drone appeared to be nothing more than a DJI Matrice 600 modified with a cargo box. DHL, on the other hand, has been using its own specially designed drone to make delivery in remote areas, while Amazon has successful piloted drone delivery over in UK.

Flytrek’s pilot over at King’s Walk Golf Course in Grand Forks, North Dakota is indeed a major milestone. Just hope that hope that some pro golfers won’t take it out of the sky like the 8-year-old protégée did. Hit the jump for the service introduction video.