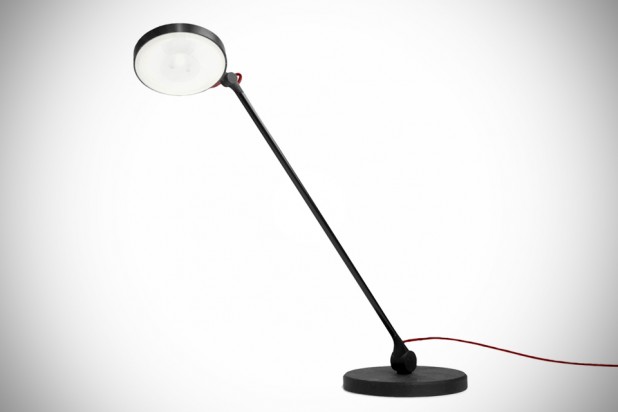 lighting used to be limited to recessed cans (don’t know what those look like? just look at Pixar’s logo) but thanks to the advancement of LED technology, lamps have never been sleeker and the Harvey LED Task Lamp you see here, is one such sleek example. conceived by Brit designer David Oxley, the Harvey drew its inspiration from surgeons lamps and features super bright Philips Luxeon LEDs with 370 lumens of brightness, affixed to an aluminum housing that also doubles as a heat sink. instead of allowing the blinding LED light to project directly out, which could do more harm than good, the light is directed to a frosted glass disc and then reflected off the curved metal reflector, resulting a soft, even lighting effect. a dimmer is included so that you can adjust the brightness to you desire. unlike traditional desk or floor lamps that uses springs or cantilever system, the Harvey employs a unique fully adjustable joint system that uses strong rare earth magnets to hold the lamp together while providing adjustability with light twist, push or pull. our only gripe about this task light is the protruding cables which is probably the result of the solid rare earth magnets at the joints but other than that, it is a beautiful desk lamp. the Harvey LED Task Lamp is another awesome project on Kickstarter and David is seeking your help to make it a reality and you can should your support by making a pledge of £79 or more and be rewarded with a Harvey Jnr. LED Task Lamp or for £99, you will bag a Harvey LED Task Lamp in a choice of Arctic white or Satin black. check out a pledge video after the break to learn more.